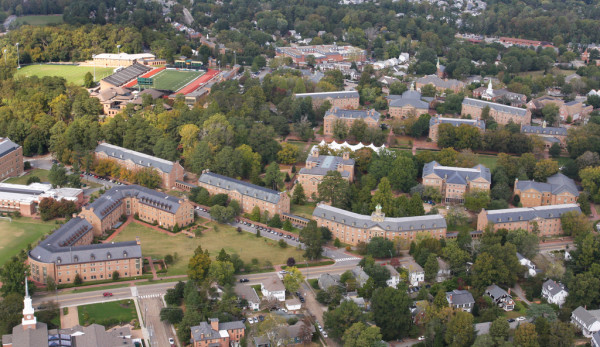 The College of William and Mary raised $105.8 million, surpassed all records for alumni involvement and reached new levels of endowment funding during the 2015 fiscal year. Still, as state support for the College’s operations continued to fall, in-state tuition reached a new high last year.

The College released the 2015 President’s Report with a message from President Taylor Reveley Jan. 4. As part of the report, Senior Vice President for Finance and Administration Samuel Jones ’75, M.B.A. ’80 included an overview of the College’s 2015 financial performance and the entire Fiscal Year 2015 financial report.

By the end of FY 2015 June 30, 2015, the consolidated endowment of the College totaled $811.2 million. Although Jones said the improved economy and good asset allocations were instrumental in growing the endowment, market factors were not the only reasons for the new levels.

“So the success of getting it to the $811 million is really fundraising, which, particularly now that we’re in campaign mode, we’re talking with lots of donors, we’re getting significant gifts, and we hope a good portion of them come into endowments,” Jones said.

Along with raising a record-breaking $105.8 million in gifts and commitments, FY 2015 was the third consecutive year the College raised over $100 million.

Although Vice President for University Advancement Matthew Lambert ’99 said that the improved economy contributed to the new high in fundraising levels, he said that there was a more important factor: the College’s For the Bold: The Campaign for William and Mary.

“There were a lot of people who knew we were actively undergoing a campaign, but we didn’t speak openly about it; we were always quiet about it,” Lambert said. “So, for instance, at the end of each fiscal year, we would announce how much money we had raised, but we didn’t state that we were in a campaign.”

Although the Campaign for William and Mary was not publicly launched until Oct. 22, 2015, months into the July 1 start of FY 2016, the College had already been actively speaking with top donors about an upcoming campaign launch.

“The way university campaigns work is you have what you officially call the quiet phase or the leadership phase of the campaign,” Lambert said. “And during the leadership phase, what you accomplish is you get those donors who are most engaged, most supportive, most generous, to make their own leadership gifts first and then when you come out and publicly announce the campaign, you can proclaim how much progress you’ve already made.”

The leadership phase of the campaign had been underway since FY 2012, allowing the College to demonstrate large increases in gifts and alumni support before the campaign’s public launch. The College set a preliminary date of Oct. 15, 2015 and a goal of reaching $500 million. As the deadline neared, gifts to the university increased.

“Getting across the 500 million mark was a huge threshold for us, and then we had quietly, amongst the senior team on my staff, set a goal of surpassing $517 million, because that was the final total of the last campaign,” Lambert said. “And we wanted to be able to say when we launched this campaign, we had already surpassed the entirety of the last campaign.”

Not only was the College able to raise $517 million, but also due to an anonymous $50 million commitment, on the Oct. 22 launch, the College could claim $532 million toward the new campaign.

Associate Vice President for Development and Campaign Director Mark Begly said that although the billion dollars is a large component of For the Bold, the College also seeks to increase the percent of alumni giving back.

“It’s important for our alumni to understand about the decreasing state support, because, take someone like myself who went to school here in the 70s, the College was supported much more greatly by the state and you knew your education was being subsidized,” Gerdelman said.

“We actually have three goals in our campaign,” Begly said. “The first goal is that we want deeper and richer alumni engagement back to the alma mater and one another, strengthening alumni engagement. The second goal is a 40 percent alumni participation, and actually the third goal is a billion dollars. That’s the thing that gets the publicity, because a billion is a big number, but it really, what we’re trying to do at William and Mary is to try to build a culture of engagement and philanthropy and 40 percent participation would put us in the top 3 or 4 schools in the country for alumni participation.”

While alumni giving reached new heights, in-state tuition rose to the highest levels in the College’s history as state support declined by 5.7 percent during FY 2015. In 1980, the Commonwealth of Virginia supported 42.8 percent of the College’s operating budget. The percentage declined to reach a low of 12.8 in 2015.

Jones noted that declines in state funding have largely coincided with national recessions. However, even after the economy recovers, state support does not return to its previous levels.

Declining state support has been coupled with tuition increases. Although the Board of Visitors introduced the William and Mary Promise in 2013, guaranteeing a flat tuition for in-state students over their four years at the College, each incoming class of in-state students faces a considerable increase in tuition. Tuition has increased by 34 percent over the past three fiscal years, with the Class of 2017 paying $10,428 dollars, the Class of 2018 paying $12,428 dollars, and the class of 2019 paying $13,978.

Jones agreed that the College is not an inexpensive model.

With decreasing state support, the importance of alumni donations increases. Secretary of the Board of Visitors and Campaign Chair Sue Gerdelman ‘76 discussed the increased role of alumni contributions at the College.

“It’s important for our alumni to understand about the decreasing state support, because, take someone like myself who went to school here in the 70s, the College was supported much more greatly by the state and you knew your education was being subsidized,” Gerdelman said. “You didn’t necessarily see a need to donate back to your college because you thought it was taken care of by taxes and by tuition.”

The College underwent significant capital building projects and proposed new projects during the fiscal year. During FY 2015, the ISC3 entered its last phase of building, and the renovation of Tyler Hall continued. The College is now shifting capital funding to the College’s arts programs and the proposed phased implementation of an “Arts Quarter.”

However, the first phase cannot begin until the College secures funding from the Virginia General Assembly.

The General Assembly convened for its 2016 session Jan. 13 and will meet until March 12. Jones said he hoped the assembly authorizes the planning during the session.

“I’m really excited about it,” Jones said. “It’s clearly a need for the campus.”