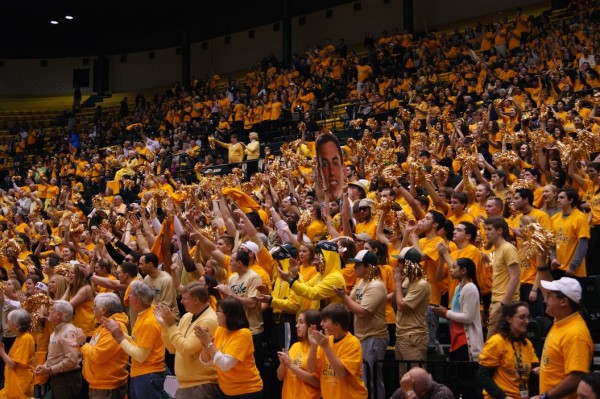 I spent the majority of my childhood in Richmond as the son of two proud University of Richmond alumni. Naturally I cheered for the Spiders, and jeered at the College of William and Mary, especially during the annual football game between the two rivals. Some of my earliest memories, both joyous and sorrowful, are of those fiercely-fought gridiron battles. Both teams enjoyed strong fan support. However, when basketball season came, no one bothered to mention the Tribe, a perennial bottom-feeder in the Colonial Athletic Association.

Years later, I was accepted to the College. When I arrived, I expected what I had experienced before: strong support for football, middling support for basketball. And yet, after witnessing another packed Kaplan Arena during Saturday’s Gold Rush game against Delaware, I have realized the opposite is true. While student crowds at Zable can be counted in the tens, with empty seats out-numbering occupied ones for some games, the mass of green and gold at Kaplan every single game stretches into the hundreds and occasionally thousands. William and Mary may have started as a football school, but it has clearly evolved into a basketball institution.

But it’s not as if the football team has suddenly started playing worse. In fact, they just reached the FCS playoffs for the first time since 2010, advancing past the first round for only the third time since 2000. Yet there was an undeniably stark contrast in student attendance for the playoff game against Richmond in December and the CAA Basketball Tournament in Baltimore last March, where College supporters dwarfed the fan bases from other schools.

The reason for the difference in attendance rests, in my opinion, within the psychology of the student body itself. William and Mary is a school uniquely preoccupied with its own history. Tradition continues to play an important role in the campus culture, with events like Convocation, Yule Log and Charter Day drawing significant crowds. As a result, the students have an awareness of their own place in the school’s storied history, and will seize upon any opportunity to etch their names into that history.

Athletically-speaking, William and Mary is distinct because it is one of five schools of the original 160 to never participate the NCAA Tournament. We’ve all watched local mid-majors such as George Mason, Virginia Commonwealth and even Richmond garner national attention during the tournament, and as one of America’s first institutions of higher education we feel we deserve a chance at Cinderella glory. And,oh, how tantalizingly close we’ve come. Three CAA finals appearances since 2010, zero wins. March madness indeed.

And while today’s students can fantasize about telling their grandchildren how they were there when the Tribe reached the tourney for the first time in the history of the nation’s alma mater, no such dreams of grandeur come to mind when watching the College play football. The program has gone as far as it will probably go in this era. They are far from competing for a national title, toeing the line between mediocrity and decency for the majority of recent memory. In the battle between making history versus sticking with the status quo, making history will win over a William and Mary student every single time.

Nevertheless I remain impressed by the capacity crowds that flood Kaplan every time I attend. Thornton may be gone, but that desire for what he fought for remains. And hey, if we can’t get over the hump in 2016, there’s always next year.