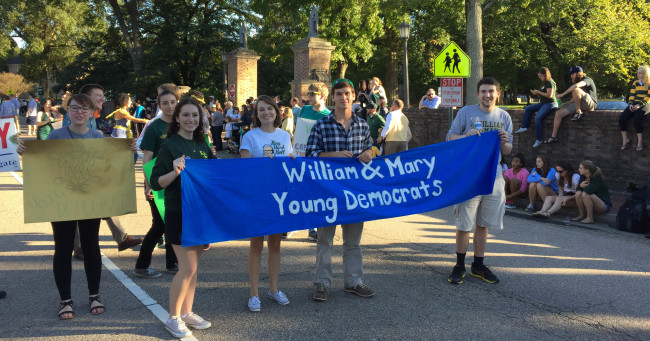 Before Virginia Delegate Monty Mason ’89 (D-93) launched his campaign for the Virginia Senate Thursday April 21, College of William and Mary student supporters took to the Williamsburg neighborhoods, gathering the 250 signatures necessary for Mason’s name to be put on the ballot.

After the unexpected death of Senator John Miller (D-1) earlier this month, Virginia Governor Terry McAuliffe called a special election primary for June 14 and a general election coinciding with the presidential election to fill Miller’s seat.

Young Democrats President Kathleen Bryant ’18, who also served as a finance intern for Mason’s 2015 House of Delegates bid, was one of these student signature collectors.

“I’m supporting Delegate Monty Mason because I can’t think of a better advocate in Richmond for the Williamsburg Community and The College of William & Mary,” Bryant said in an email. “As a resident of Williamsburg and an alum of the College who can frequently be found on or around campus, Monty has always been incredibly accessible and receptive to the concerns of students.”

Because of Mason’s support for the Sierra Club, NARAL Pro-Choice Virginia and LGBT Democrats of Virginia — progressive causes Bryant said matter to her — Bryant stated that she would be voting for Mason June 14.

Mason said that even a month ago he would have laughed if someone asked him to run for Miller’s seat. Although initially approaching the prospect of a Senate bid with mixed emotions after the sudden death of his friend and mentor, Mason decided running was something he “needed to do.”

“We had the same issues of importance to us — education, the environment, non-partisan redistricting, we were so much in lock-step over so many things that I think it’s a very natural progression and I’m excited for the challenge,” Mason said.

We had the same issues of importance to us — education, the environment, non-partisan redistricting, we were so much in lock-step over so many things that I think it’s a very natural progression and I’m excited for the challenge,” Mason said.

Assistant to the President and Secretary to the Board of Visitors Michael Fox, who knew Mason prior to his 2013 bid for General Assembly, mentioned Mason’s accessibility on campus and in the Williamsburg community. Although he cannot give endorsements as a member of the College administration, Fox agreed Mason’s close relationship with the College is an asset for the school.

“The familiarity I think for any elected official with institutional knowledge of a place like William and Mary is always beneficial for that institution,” Fox said. “Higher [education] is a tough issue to understand … so having some awareness of that background coming into office is certainly a big plus to have someone who understands higher [education] I think as well as Delegate Mason does.”

The familiarity I think for any elected official with institutional knowledge of a place like William and Mary is always beneficial for that institution,” Fox said.

Representing the first district of Virginia in the Senate would give Mason some continuity: 70 percent of his current House of Delegate territory overlaps with the Senate district for which he is now campaigning.

In response to whether or not he would continue to support the College in the Virginia Senate, Mason replied with one word: absolutely.