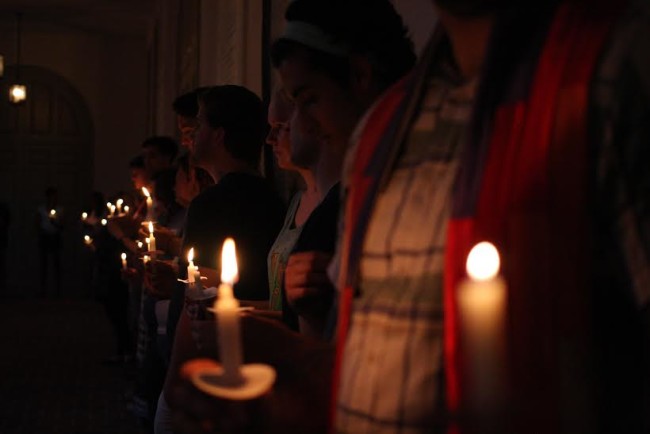 For weeks the College of William and Mary’s campus has been all but empty for summer, but last night, in the wake of the tragedy in Orlando, Fla., a crowd of students and community members could be seen congregated in the portico of the Sir Christopher Wren Building.

This sight was a candlelit vigil organized by the William and Mary Lambda Alliance, paying respect to those shot this Sunday in in Orlando’s Pulse nightclub. The shooting — the deadliest in the United States’ modern history — claimed the lives of 49 people and injured 53 more.

“I’ll start out by saying that for a lot of us this month of pride has become a very confusing one,” Alter said.  “Our feeling of pride is tainted with pain, with sorrow, with anger and with loss.”

He added that the choice of target — a gay nightclub — was particularly disturbing.

“The nightclub is one of a few places where we can celebrate and have fun without second guessing, which is why this tragedy hurts us all the much more,” Alter said.  “One of our sanctuaries is breached. Now do we need to think twice before we even go out with our friends? Is there no place where we can feel and be safe? When I find myself asking these questions, I always find solace in community, the people around me. When we are at our lowest points, at our most scared, or our most hopeless, that’s when we’re the closest.”

Alter added that it is important to stand in solidarity with the latino community, the transgender community and communities of color. Most of those killed Sunday were Hispanic.

“We stand together as family, a family that is stronger than blood because we chose to stick together, despite our differences and all odds,” Altar said to those at the Vigil. “So tonight, and tomorrow, and for this month of pride, and for the many years to come, we will stand together.”

Hayes Parker-Kepchar ‘18 and Pallavi Rudraraju ‘17, who co-organized the event, followed Alter’s speech with statements of their own.

“We organized this vigil because for many queer people we cannot turn to our families to express anguish over homophobia, transphobia and intolerance,” Rudraraju said. “Spaces like these are all we have.”

She emphasized that is is important to acknowledge the victims’ ethnicities, sexualities and gender identities in the context of the attack.

Following Parker-Kepchar and Rudraraju’s remarks, Katie Baldewin ‘17 took to the center of the circle to read the names of the victims while the crowd observed a moment of silence. The crowd stood still while she spoke, and after the last name had been read, people began to share personal stories related to the tragedy.

After the vigil, Parker-Kepchar said that one of the reasons she felt compelled to help organize this event was seeing the outpour of grief and helplessness from her friends on social media.

I just really wanted to create that space where people could share what they were feeling, could start to heal, could feel loved and let others here know that they are loved too,” Parker-Kepchar said.

“I just really wanted to create that space where people could share what they were feeling, could start to heal, could feel loved and let others here know that they are loved too,” Parker-Kepchar said.

Students from the College, like Parker-Kepchar, Baldewin and Eden Tadesse ’17, had been gathered in Washington D.C. for Capital Pride Festival celebrations only a few days earlier. They described Pride as a joyous event, which only made the news from Orlando that much more appalling for them.

Baldewin said she was struck by how many of those in attendance seemed to be familiar with the circumstances of the tragedy, having experienced similar events before.

“It [the tragedy] shouldn’t be the case even once, and the fact that it’s the case multiple times is just unbelievable,” Baldewin said.

Andrew Innis ’17 shared his story on how shocking yet not unforeseeable such an attack on the LGBT community was.

“You get to a place of almost complacency, and you kind of think, okay, things are getting better, or somewhat better for once, but then something like this does happen and it’s like ‘Wow, never mind, actually things may have not changed that much at all,’” Innis said. “It’s surprising, but at the same time it’s not, and the most important thing is just being there for the community and having people around for you too.”

For Tadesse, the conversation the vigil inspired, though marred by tragedy, hinted at progress.