Home Latest News Academics Convocation speaker returns to give back 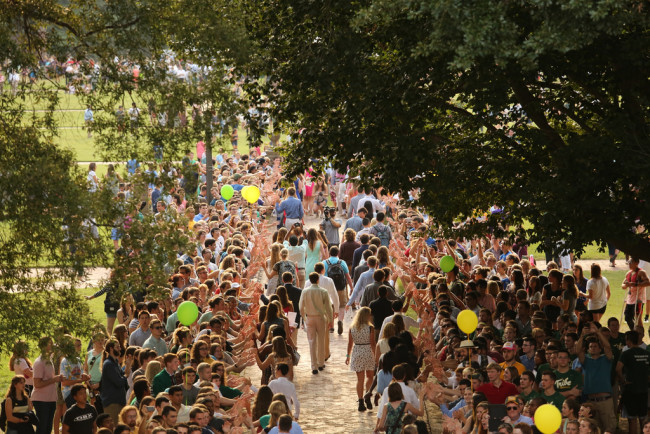 Before students walk through the Sir Christopher Wren Building Wednesday, Aug. 24, they will hear a speech from Nicco Mele ’99, a consultant for Fortune 1000 companies.

Since his graduation from the College, Mele has served as a former executive at the Los Angeles Times, an investor in technology startups, which he also advises, and the director of the Shorenstein Center on Media, Politics and Public Policy at the Harvard Kennedy School. He is also a senior fellow at the University of Southern California’s Annenberg Center on Communication Leadership and Policy.

His return to the College marks a focus on entrepreneurship and advocacy. College of William and Mary President Taylor Reveley said he is amazed at all Mele has accomplished in his years after graduation.

We are in for a rare treat when Nicco returns to campus to help celebrate one of the special occasions in William and Mary’s annual life,” Reveley said.

“We are in for a rare treat when Nicco returns to campus to help celebrate one of the special occasions in William and Mary’s annual life,” Reveley said. “He is a modern Renaissance Man, who has accomplished an amazing amount in a very few years.”

His career found its roots in Williamsburg: on campus he worked in the Technology Services department for four years and received a Wilson Cross-Disciplinary Scholarship from the Roy R. Charles Center for Academic Excellence to study glass-blowing.

“What brought me back to campus sounds corny but it’s true,” Mele said. “I think William and Mary students are going to change the world and I want to encourage them and tell them that. As a freshman it’s hard to believe that you can do great things, but in fact you can.”

According to College Spokesperson Jim Ducibella, the College anticipates Mele’s speech to touch on how his diverse experiences at the College enhanced his career.

While we have not seen an advance copy of Nicco’s speech, which is not unusual, the overarching theme of Opening Convocation is to welcome all of our new students into the Tribe family,” Ducibella said in an email.

“While we have not seen an advance copy of Nicco’s speech, which is not unusual, the overarching theme of Opening Convocation is to welcome all of our new students into the Tribe family,” Ducibella said in an email. “It is one of our cherished traditions. Given that, we would anticipate that Nicco would touch on his many experiences at William & Mary, and how they enhanced his ability to create a wildly successful career in a variety of diverse areas. We would also anticipate that he would tell not only incoming students but all present that life opportunities are open to them in ways that are limited only by their imagination.”

This will not be Mele’s first time returning to campus since graduation. He has also participated in the Weingartner Digital Citizenship Forum at the Raymond A. Mason School of Business in 2014.

Much of his career has focused on digital technology, the internet and politics. As a webmaster for a presidential campaign in 2004, Mele worked to make social media popular as a tool for political fundraising. He then co-founded a digital consulting firm, Echo & Co., in Boston and Washington, D.C.

This focus of his career will be highlighted in his convocation speech — particularly the implications of this year’s presidential election.

“I think that this presidential election ought to remind us that we face real and significant challenges in our public life as a nation,” Mele said. “William and Mary is always historically at the heart of that. William and Mary has a long history of producing great public servants. The only solution to the challenges that our politics presents us with is for William and Mary students to be more engaged in the life of our country.”

One thing that Mele also hopes to convey is that success after graduation comes from using the resources the College offers undergraduate students.

“Use your four years in college to have a diversity of experiences because in a networked digital world, the diversity of your network of expertise you can call on is one of the greatest assets you can have,” Mele said. “Take classes in different departments and spend your summers doing different things and look for opportunities to maximize the amplitude of your experience.”