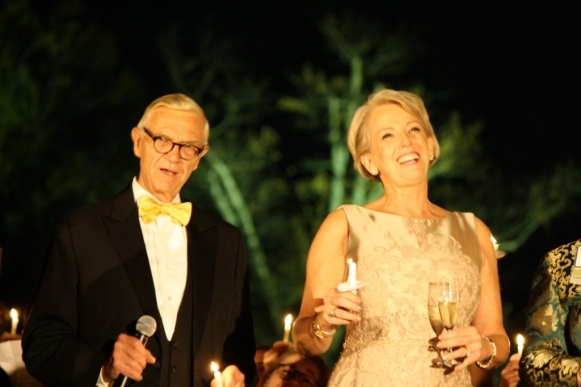 Almost a year since the public launch of its latest fundraising campaign, the College of William and Mary has raised $143.1 million dollars in a single year and increased alumni participation rates to an unprecedented 28.7 percent.

The billion-dollar For the Bold campaign has raised $578 million  since the advent of the campaign’s quiet period in 2011 with almost 50 million of that accrued since the campaign’s public launch in October 2015.

In addition to targeting one billion dollars, the For the Bold campaign seeks to raise alumni participation rates to 40 percent and strengthen alumni engagement.

According to Vice President for University Advancement Matthew Lambert ’99, the College has made progress in all three respects.

“Alumni engagement, that’s the beginning of it all,” Lambert said. “And getting students and alumni to feel connected to the institution, we need them to feel deeply invested in the lives of our students, the lives of our faculty, making sure that they are successful. Second, is broad based support. You can’t do this on a shrinking base of people … And third is of course the billion dollars, which is the looming number that is always out there for us and we keep getting closer and closer.”

With $578 million raised, the College is now almost 60 percent of the way to the billion-dollar goal, according to July 2016 figures.

During fiscal year (FY) 2016, not only did the College surpass $100 million of fundraising for the fourth consecutive year in a row, but it also surpassed the previous single year fundraising record of $105.7 million by over 30 percent. Part of this can be attributed to a crescendo of donor support after October’s public launch of For the Bold, but another portion can be explained by a trend increase in yearly fundraising.

“When we look at the trends what’s enormously gratifying is that we now have four years in a row of over a hundred million dollars,” Lambert said. “We’ve talked about that being our new floor — we want to make sure we stay above $100 million. And I think what’s also gratifying is to see the broad base of participation. Whereas nationally, there are fewer donors giving larger gifts; at William and Mary, there’s more donors giving more gifts.”

The year following a campaign’s public launch is particularly successful in terms of fundraising. According to Lambert, it’s fairly difficult to replicate that magnitude of success in future years.

“I have stated publicly I do not anticipate that we are going to raise a $143 million again this year,” Lambert said.

But, the magnitude of yearly fundraising and the billion-dollar goal is only one of three aims of the For the Bold campaign. Another crucial component is increasing alumni participation rates to 40 percent by 2020, which would place the College fourth among the top universities, public or private, in the nation.

At the beginning of this fiscal year, the figure was 27.1 percent, but as of July, participation rates have increased to 28.7 percent, cementing the College’s status as the top nationally ranked public school for undergraduate alumni participation.

Instead of solely targeting large gifts from a few wealthy donors, For the Bold encourages broad-based support regardless of the dollar figure. According to Campaign Chair Sue Gerdelman ’76, this message sets the current For the Bold campaign apart from previous fundraising efforts at the College.

“In the past, you knew there was a campaign happening, you hoped to participate, but you thought, I’m not sure my gift will matter … For me, this has been the highest engagement I have ever seen at William and Mary and it’s been very exciting,” Gerdelman said.

Small gifts have made up a substantial portion of giving over the past year: $2.4 million have come from gifts under $250 during this fiscal year.

Thus, the message, according to Gerdelman, is that every gift matters.

Efforts to increase support for scholarships have been particularly successful since the public launch of For the Bold.

Over this year, 5318 donors gave over $68 million toward scholarships.  Of the $1 billion goal of For the Bold, $350 million will be allocated to scholarships,  which include need-based, merit-based, international, athletic and graduate scholarships.

According to Campaign Director Mark Begly, For the Bold prioritizes scholarships because they help attract the most qualified students to the College.

“The reason for our focus on scholarships is that it’s an investment that really makes the difference for students being able to attend the College,” Begly said. “Unfortunately one of the things that sometimes happens is that we lose good students who want to come to William and Mary to other institutions because other institutions are able to offer them more scholarship dollars.”

$200 million of the total scholarship goal will go towards need-based scholarships, which, according to Begly, is a primary focus of the campaign.

“One of the things we’ve realized is we need to not only attract the best and brightest, so to speak, but to attract those who might not be able to attend otherwise … It’s important to give all students, regardless of economic background, the opportunity to come and get a great William and Mary education,” Begly said.

The next set of campaign numbers will be released in early October for the first quarter of fiscal year 2017.