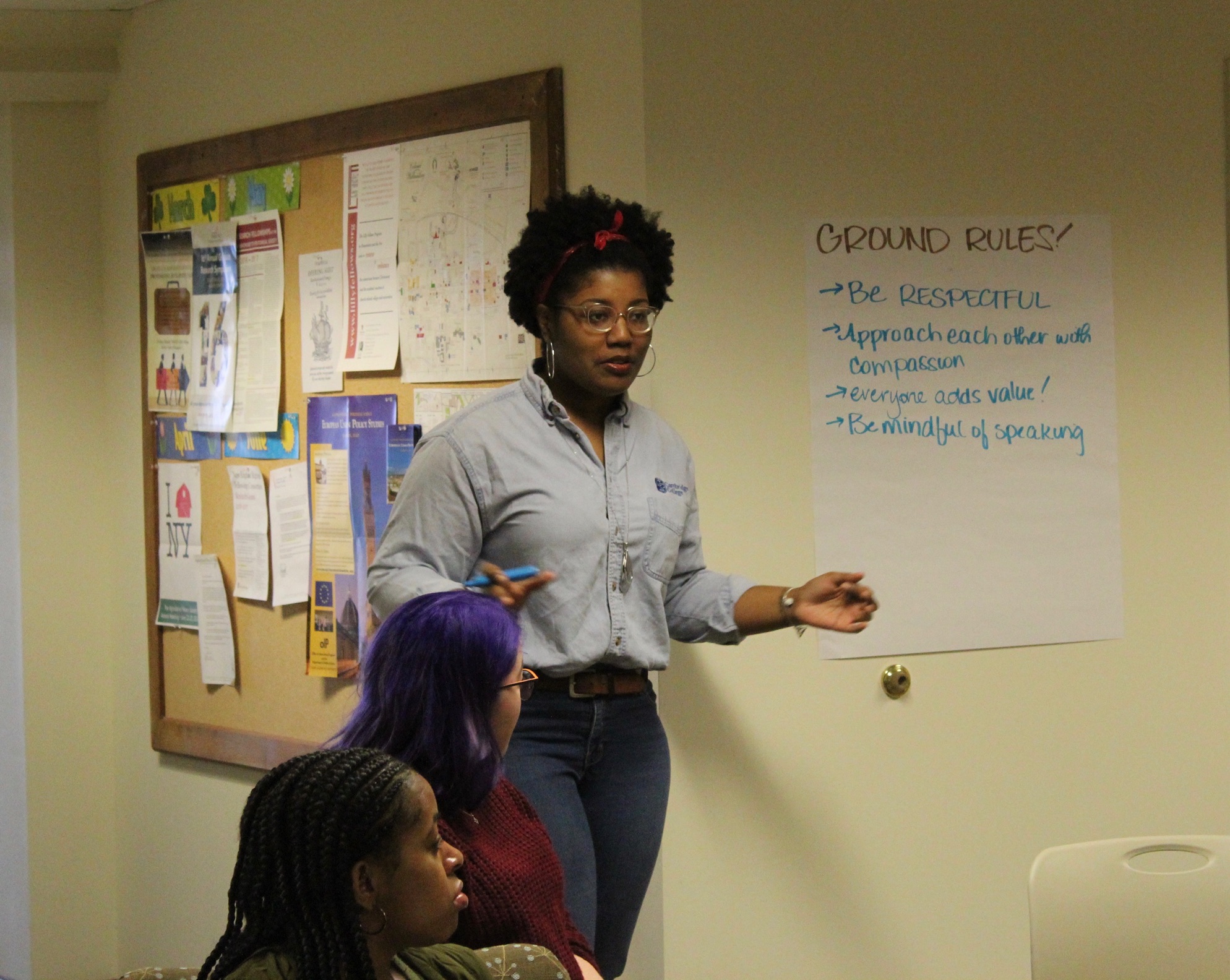 When College of William and Mary doctoral student Ravynn Stringfield was a little girl, the first thing she did after the newspaper arrived Sunday mornings was read the comics.

For several years, Stringfield would cut out her favorites, paste them on a sheet of paper and add them to her collection, which she still keeps today. Stringfield credits this early love of comics in part to her father, a lover of fantasy and science fiction who made sure to bring her along when he watched superhero movies. As she got older, she became interested in the psychology of the American superhero story, a path which eventually led her to Williamsburg, Virginia.

Stringfield is currently in her second year as a graduate student in the College of William and Mary’s American studies department. As a joint master’s degree and Ph.D. program candidate, she completed her master’s coursework and thesis this past year and will spend the rest of her time in Williamsburg working toward her Ph.D.

Stringfield’s academic passion, which brought her to the College’s American studies department, is the intersection of comics and culture. Stringfield’s master’s research focused on exactly that.

Her thesis, “Black Capes, White Spies,” stitched together two essays about the representation of African Americans in comics. The first was a character biography of Marvel Comics’ “Black Panther,” the second a literary analysis of “Incognegro,” a graphic novel published by DC Comics imprint Vertigo about a light-skinned African-American reporter who investigates lynchings in Mississippi.

I was interested in the time period and what [Black Panther] may have represented to African-American people reading the comics,” Stringfield said. “We’ve seen this resurgence of Black Panther in a moment of Black Lives Matter and I wanted to go back and see if there was any correlation between Black Panther, social movements and the representation of African Americans.”

“I was interested in the time period and what [Black Panther] may have represented to African-American people reading the comics,” Stringfield said. “We’ve seen this resurgence of Black Panther in a moment of Black Lives Matter and I wanted to go back and see if there was any correlation between Black Panther, social movements and the representation of African Americans.”

The connection between comics and identity was not as straightforward for Stringfield as her path might suggest. As an undergraduate student at the University of Virginia, Stringfield studied French and comparative literature, but it wasn’t until she studied abroad in Paris and went to an exhibit about “Aya of Yop City,” a graphic novel about a girl in Côte d’Ivoire, that she became fascinated with the idea of using tools of literary analysis to look at comics. Her undergraduate thesis incorporated “Aya” as well as “Persepolis” and “The Arab of the Future” — all graphic works that tell stories of outsider identities in France.

“That was when I first realized that I could do studies about people of color and graphic novels, together,” Stringfield said. “From there, I realized that I was asking these questions about identity and about race of other countries and I wasn’t being reflective of my own culture, so I decided that I needed to turn my attention to America.”

Stringfield described the field of American studies as a haven for misfits of the academy, an ideal place for scholars interested in interdisciplinary approaches to American culture.

One thing that Stringfield said drew her specifically to the College’s American studies program was the chance to work with associate professor of English and American studies Elizabeth Losh, whose areas of specialization include media theory, technology studies and digital rhetoric. As  part of her program requirments, Stringfield must complete an assistantship each year. Her first year at the College, she worked as the editorial assistant for the Omohundro Institute of Early American History and Culture. This year, she is the graduate assistant for The Lemon Project: A Journey of Reconciliation, the ongoing research and restorative justice initiative for African Americans at the College. Stringfield is active within the community engagement and student outreach branches of the Lemon Project. She organizes events like Porch Talks, drum circles and the upcoming eighth-annual Lemon Project Symposium. The symposium will take place March 16-17 and will also be a part of the ongoing 50 year commemoration of residential students at the College.

“We’re at a college campus where things have stood still in time,” Stringfield said. “We still have buildings named after Confederate leaders and we live in a campus that doesn’t always see the need to acknowledge the presence of African Americans at the College. … African-American people have a history that is not something that you’re taught unless you seek it. For a lot of white students in particular at the College, you’re taught a certain sort of history, and unless you have a professor that’s particularly sensitive to African-American issues, you could go all semester without reading anything about a black person. You could go all semester without reading anything written by a black person. It’s important that the resources are there for the people who want a different perspective.”

For Stringfield, that is the great strength of the Lemon Project — it offers a different perspective that students might not get otherwise during their time at the College and recognizes that the College’s history is expansive and includes many different types of people. Stringfield also chronicles her graduate school career through her blog titled “Black Girl Does Grad School.” Stringfield wanted to document her experience but also provide a resource for other African-American girls and women considering grad school. A year and a half later, Stringfield had published over 60 posts on “Black Girl Does Grad School.” Sometimes she writes about the conferences she attends or the projects she works on, sometimes she writes about her personal experiences with mental health.

“It’s a way for me to process, but also a resource book for other people doing grad school to know that you’re not alone,” Stringfield said. “There’s a tendency to hide the pain with a smile and say everything is going really well, but the reality is grad school is really difficult, it’s very lonely and it can be really isolating. I want to be honest about the fact that it is very tough, but all of my successes have been really great successes.”

Now that she has completed her master’s degree, Stringfield is focused on continuing her coursework and passing her comprehensive exams. While she has not yet decided what the focus of her Ph.D. dissertation will be, she is interested in continuing to further her knowledge in the fields of African-American literature, comics studies and afrofuturism. Another potential focus for her research? The upcoming Marvel “Black Panther” movie, set to be released Feb. 16.

It’s so important to see an African-American hero in a live action film, on his own,” Stringfield said. “Not as a supporting character, not in someone else’s movie, not as a background character, not searching through the film to find the one black character and hope they don’t die.”

“It’s so important to see an African-American hero in a live action film, on his own,” Stringfield said. “Not as a supporting character, not in someone else’s movie, not as a background character, not searching through the film to find the one black character and hope they don’t die.”

For Stringfield, superheroes occupy a distinct place in American society, because they represent specific values of the American population.

However, much like the stories Stringfield wrote about as an undergraduate, the titular protagonist of “Black Panther,” an African in the United States, has an outsider perspective on the culture he occupies.

“He’s both an outsider and an insider,” Stringfield said. “He’s always treated as an African American, which is a very particular place to be, but as an outsider he can offer some interesting comments about white America and black America both.”

She said she has high hopes for the big-screen treatment of “Black Panther.”

“I bought a ticket the day that they were available for the first viewing possible,” Stringfield said. “I don’t think I’ve been this excited about a movie in a long time. I’m ready to enjoy it. But I’m ready to do some critical work on it, too.”