Disclaimer: this is not news. This is part of the Fat Head, a Flat Hat senior tradition in which the outgoing editors dunk on themselves, the College, and the student culture here. Again, this is not news. If you treat it as such, that’s on you. Any resemblance to characters, real or fictional, is purposeful and malevolent. We warned you.

In the beginning, God created heaven and the earth. Then he created a divine entity commonly known as Flatthew Hatthew (he/him). Hatthew was the paragon of journalism, all that was factual and true in the world. For some reason unknown to man, Hatthew really enjoys swamp weather and sought residence in Williamsburg, VA. He found the humidity and asbestos comforting, despite their detrimental effects to his pages.

One hundred years after the creation of Hatthew, and unbeknownst to him, God created Squatman Mansquat (all pronouns). Mansquat embodied all that was opposite of Hatthew, eschewing journalism and ethics and working for cheap laughs and vague references while willfully transacting in disinformation.

Initially, Hatthew found Mansquat to be little more than a nuisance. He was only a child, not a competitor in news or staff, and kind of ugly (Hatthew, it should be said, is a beacon of perfection and beauty). Eventually, as he grew older, Mansquat proved a thorn in Hatthew’s side, but like a really really small one that was fairly easy to ignore. Plus he got hot. But that thorn was growing and growing until one day, the day, everything came to a head.

That day God came to Mansquat and Hatthew to announce the creation of a new minor deity. It would be named Wrenjamin Journal (it/its/abor/ted) and represented a small, unwonted, and downtrodden group. God told the two older deities that it was their duty to raise Wrenjamin to become yet another respected publication.

Mansquat and Hatthew were split over the rearing of Wrenjamin. Mansquat wanted to teach it the ways of disinformation and bad memery. Hatthew wanted to enforce strict values and ethics, never leaving room for fun. The two fought fiercely and their battle created the depression we now know as Campus Center. Eventually, with their strength exhausted and little to show for it, they agreed to leave Wrenjamin on the Grim Dell mattress, an unfortunate amalgam of its adopted parents and a sign of what happens when mixing fact and fiction..

Left to its own devices and ignored by its parents, Wrenjamin managed to cause more memorable kerfuffles to the swamp-dwelling humans of Williamsburg in its two years than all the actions of Hatthew and Mansquat in their combined 124 years. In those two years, Mansquat and Hatthew had grown and changed. The experience of rearing a child had left them forever intertwined. This was best reflected by the decreasing clarity between fact and fiction, and evidenced by the mixing of acolytes between Mansquat and Hatthew.

While Wrenjamin laid waste to the world above, all was quiet in the basement of Campus Center. Flatthew and Squatman had moved in together and shared an office, computers, chairs, and even a bathroom. One day on their shared printing schedule, Squatman and Flatthew were distracted from their work, entranced by each other’s fonts.

While converting Flatthew’s InDesign file to a pdf, Squatman joked, “Quote me like one of your french girls.” But it wasn’t a joke.

Flatthew looked up from the computer screen into Squatman’s deep, hypnotic swirling eyes (they really do swirl, like a melting chocolate and vanilla soft serve swirl in a cardboard-flavored sugar cone on the Ocean City, NJ boardwalk in late August of 1995 as you wait expectantly, hornily, for the mainstream US premier of the New Zealand Muppets satire film Meet the Feebles next week).

Flatthew flew across the desk to Squatman’s supple and nubile 100-year younger body.

“Is that a stray Oxford comma in your pants or do you want me to fill your pages in the Campus Center bathroom next to the piss fountain?”

Squatman, a really remarkably and concerningly large, massive even, fan of piss culture, was frozen with anticipation. “I’ve never wanted anything more,” he managed to squeak out.

Flatthew gently took Squatman’s calloused hand and sprinted out the door, eager for physical contact. Squatman, for his part, was eager for the sex too, but mostly to drink from the piss fountain after completion as a way to top off Flatthew’s creamy, flavorful fish dip. The two quickly went at it, Flatthew naturally taking the lead and dominance over the inexperienced Squatman.

“If you can take a beating on Yik Yak you can certainly take this beating,” growled Flatthew before he lifted the plastic press pass from around his neck and flogged Squatman’s center fold. Squatman let out a moan so great it caused the first major earthquake in Virginia’s recent history, a 6.9 on the Richter scale.

Virginia wasn’t the only thing quaking on that fateful evening as black, white, and read-all-over confetti flew between the two. The periodical passion only lasted the attention span of their readers — that’s to say a few seconds — but for Flatthew and Squatman, those magical moments were enough to renew their relevance for the next centennial.

With a final grunt, Flatthew filled Squatman’s pages with his sticky, probably radioactive,  schlong sludge. Squatman’s thin paper dripped with a mix of sweat, ink, and both deities’ love liquor. As they wiped themselves clean, Flatthew and Squatman did not notice willymilk concoction begin to swirl, transcending beyond the newspaper pages, much to the likes of Squatman’s enchanting eyes. 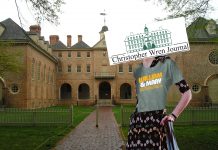 FAT HEAD: People disagreed with my opinions at college – why is this allowed? 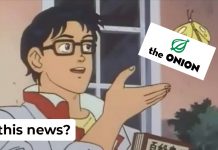 FAT HEAD: Note from the ombuds, man: This issue is satire – don’t email me. 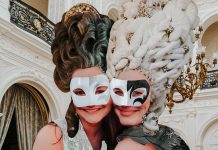