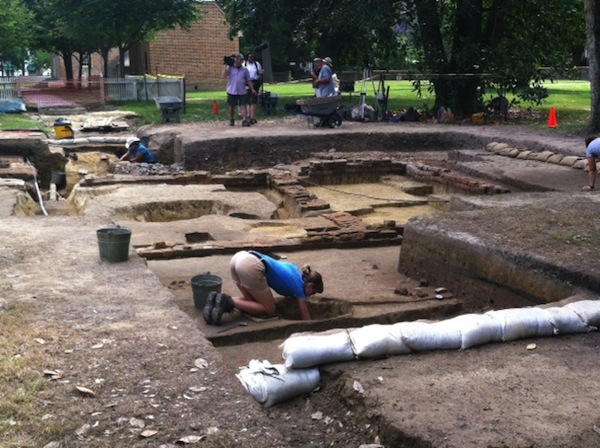 Archaeologists with the Colonial Williamsburg Foundation will be concluding their excavation of a brick structure located next to the Sir Christopher Wren Building, which first began in May.

The building’s identity cannot be confirmed with certainty until environmental testing is completed, but Colonial Williamsburg archaeologist Andy Edwards ’77 has what he believes is a pretty good idea of what the structure was used for.

“This could be a brew house,” Edwards said. “We’re not saying it’s definitely a brew house. It could possibly be a laundry, but we haven’t found any buttons. We did find a keg capper, a brass spigot for a keg. That’s promising.”

Colonial Williamsburg has a history of excavating Historic Campus. The work dates back to the restoration of the Wren, the President’s House and Brafferton in the 1930s. This particular dig uncovered a 20 by 18 foot brick building 2 feet below the surface of the ground. It survived from the first quarter of the 18th century to the time of the American Revolution.

Archaeologists narrowed down potential uses for the undocumented structure when they discovered ashes but no chimney remnants. After the first Wren fire in 1705, the College’s kitchen, bake house and brew house moved from the cellar of the Great Hall to separate buildings as a safety precaution.

Master of Historic Foodways at Colonial Williamsburg Frank Clark acknowledges that having a brew house located next to an academic building may seem counterintuitive. He explained that the general attitude toward alcohol was very different in colonial America.

“They viewed fermented beverages like beer and wine as healthy and nutritious although often distilled beverages like rum and whiskey were considered more dangerous,” Clark said in an email. “There was no age limit on drinking or buying alcohol in this time but, it was considered bad form to be too drunk in public.”

Clark also notes that several 18th century mishaps involving College students and local young people may have been fuelled by alcohol. Such misbehavior may have prompted a Dec. 19, 1796, mandate from the College, which stated that, “No liquors shall be furnished or used at table except beer, cyder, toddy, or spirits and waters, and there only in a moderate quantity.”

The College’s decision to expand the brick walkways crisscrossing Historic Campus is what prompted this current dig. It is the school’s policy to excavate before beginning construction on an area of Historic Campus. When the building was uncovered earlier in the summer, the College put its construction schedule on hold until the structure could be thoroughly analyzed and excavated.

Professor Susan Kern has only been Director of Historic Campus for about three weeks. She explained that this dig’s relatively lax schedule is unusual in the world of archaeology.

“We have invested more time and money in order to do the project right,” Kern said. “We had the luxury of time. Fortunately, the Colonial Williamsburg archaeologists were available to continue. It was clear at many stages that this was the kind of project that needed to be done right.”

The discovery of the brew house raises questions that have excited Kern and other researchers at the College. Brewing was a labor-intensive chore often done by women.

Kern noted that the beer was likely part of the regular food ration of students at the Grammar School, Brafferton Indian School, College, as well as the school masters and even the College workers, and perhaps even the slaves and overseers at the College’s Nottoway Plantation.

Bursar’s records indicate the College was actually buying hops from slaves at Nottoway.

Once the dig concludes later this week, the site will be refilled with dirt to protect the structure. Environmental samples will be sent to labs and specialists for analysis. Those tests could take months, even years, to complete. In the meantime, there is almost certainly more left to discover on Historic Campus. Edwards said there may even be other unknown buildings still beneath the ground surrounding the Wren.

“There probably are [other buildings buried in Historic Campus],” Edwards said. “It’s hard to say. I walked over this one for 47 years and didn’t know it was here. It was just waiting.”