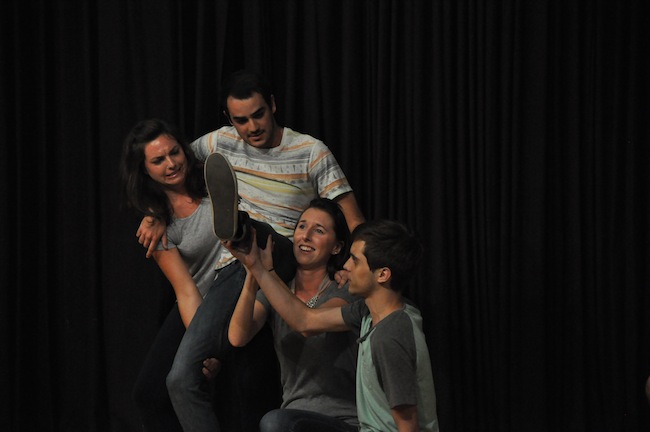 “For some reason, we got Jonathan to take off all of his clothes except for his underwear,” Robert Torrence ’16 said. “It was an hour building up to this last scene, and we were all on stage, holding hands. I think we were the Sex Club of William and Mary or something ridiculous, and we were all graduating, and it was very sad for us.”

Torrence is a member of Sandbox Theatre, and this is his favorite performance. Sandbox Improv, one of two improv groups on campus, is relatively new to the comedy scene. Torrence and Claire Favret ’14, formed the group after trying out for Improvisational Theatre, which was founded in 1986.

“When I transferred here for my sophomore year, I tried out for IT, and I had never seriously tried improv,” Torrence said. “I got called back, but didn’t get in.  There were a ton of people at callbacks, and they were all so talented, but they only were able to take two people. Claire contacted me a week after callbacks, saying, ‘There were so many talented people at callbacks; it’s not fair that these people have to stop doing improv.’  So her and I got together and started Sandbox that year.”

Sandbox performs long form improv, while IT focuses on mostly short form.  Short form is the style popularized on the ‘90s show “Whose Line Is It Anyway”, where there are rule-based games as well as audience suggestions that inspire the performances.  When performing long form improv, the group predetermines a structure for the show. For Sandbox, this is often a monologue and three scenes, followed by another monologue and three scenes, then a run of scenes to tie the show together.

“Practice makes perfect,” IT co-president Mallory Tucker ’15 said.  “Often we are asked, ‘Why do you guys practice? You’re an improv troupe; I thought you made it all up.’ We practice three times a week, 90 minutes a session. It really takes that to understand how to work with your team.  We’re like any sports team, except much less adept at anything.  We have to work together constantly; we have to know how each member works.”

In addition to practicing together three times a week, the group does something particularly unique. Over fall break, IT spends 16 hours in a van together;  the group drives to Chicago every year to participate in workshops with the many IT alumni who have moved to the “Windy City” to pursue careers in comedy.

“To get into IT, you need to be voted in unanimously,” IT member Gillian Giudice, ’17 said. “We are really strict on that; we make sure that every person in the group is valued. Everybody cares about you, everyone wants you to be there, and similarly, everyone wants to be there.”

IT and Sandbox are closely bonded groups, but all members come from different backgrounds. Most do not have experience in improv, and some haven’t even participated in theater before.

“We’ve had members from Greek life, club sports teams, theater groups, all different majors,” Tucker said. “Everyone’s doing something different, that’s one of the things that impressed me most when I was auditioning.  It’s a very unique crop of students who are coming together for this really weird thing.”

Instead of looking at acting credentials, the groups care more about how potential members work with others on stage.

“The number one rule in improv is ‘say yes,’ which means that if someone says it, it’s true,” Torrence said. “Tina Fey says, ‘If one of you comes on stage and one of you is a hamster, and one of you is a cop, congratulations, you’re both hamster cops.’ You’re both right; no one’s wrong.  When you say no to people, that’s a very bad scene.”

To be successful on stage, Tucker says, teamwork is essential.

Both groups perform on campus at least once every month.  Sandbox has a big Halloween show, and many IT members enjoy performing at their “underground” show in the winter, where they accept any audience suggestions, not matter how crude or ridiculous. Another popular IT show is held on the Day for Admitted Students.

“We hold Improvathon, which is a non-stop 12 hour show on Day for Admitted Students,” Giudice said. “Hour 12 is an improvised musical, and if you’ve collected $50 in your donation envelope for Avalon — the alums always come around and make sure everyone has $50 — you have to do the improv musical with a live worm in your mouth.”

In addition to the traditional annual shows, both groups are trying to shake things up and constantly improve.  This year, for the first time ever, IT is working with other campus comedy groups to organize a comedy invitational for other college groups from around Virginia.

“In the last two years, especially with the creation of another improv group on campus, it’s definitely helped us to look at how we do things and challenged us to try new things,” Tucker said.