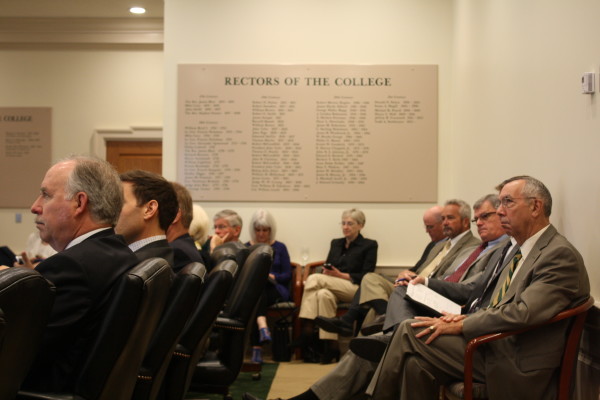 The Board of Visitors Committee on Academic Affairs convened Sept. 17 to discuss the College of William and Mary’s reaccreditation, the class of 2019 admission statistics, and an update from the faculty liaison committee chair.

“The objective is not only to bring in the best students, and our admissions dean has done it yet again this year, but also to hire, I think, the very best faculty that the market brings out,” Scott said.

“The objective is not only to bring in the best students, and our admissions dean has done it yet again this year, but also to hire, I think, the very best faculty that the market brings out,” Scott said. “Let me just review the elements of that latter goal: most importantly, is the continuation of the William and Mary Promise, which I think that we’ll all agree has been one of the most successful innovations in higher education in the last decade.”

Provost Michael Halleran provided the committee with a brief update about the College, highlighting the weather that he believes signals a successful academic year. Halleran then introduced Vice Provost for Academic and Faculty Affairs Susan Grover.

Grover informed the committee about the Southern Association of Colleges and Schools Commission on Colleges decennial reaccreditation process. The College is a consenting member of SACSCOC, and the accreditation qualifies College students for financial aid. The process began two weeks ago when the vice provost’s office submitted the necessary document and will continue until a decision is received in December 2016.

The Quality Enhancement Plan is another aspect of the SACSCOC accreditation process. The QEP that the College is creating focuses on ensuring that all students entering the COLL curriculum will be prepared for their senior capstone project.

“What does that look like?” Grover said. “In the national language of education, people talk about high impact experiences, which are those kinds of educational experiences that have been proven to do the most, to help students really move forward in their education.”

“We play up the #WM2019, their class at the time of their admission,” Wolfe said.

The final QEP will be submitted in January 2016 to SACSCOC.

“We play up the #WM2019, their class at the time of their admission,” Wolfe said. “As we move forward with the process, as we send out, in late March, those admissions decisions check in with #WM2020. It’s always amazing to see the excitement and what these students are posting via Instagram, via Twitter.”

English and American studies professor and Faculty Liaison Committee Chair Elizabeth Barnes updated the committee about the faculty assembly. Barnes said a newly designed faculty survey will be sent out this fall.

Last year’s faculty assembly researched retirement incentives and concluded that no incentives should be offered. Additionally, The current assembly’s plans to discuss amendments to the faculty handbook for matters dealing with sexual harassment allegations during its meeting this month.

Barnes noted that continuing issues that the assembly will look into include integrating non-tenure eligible faculty, finding ways to promote and support students of color, and addressing mental wellness on campus.

The committee then moved into executive session to discuss resolutions.