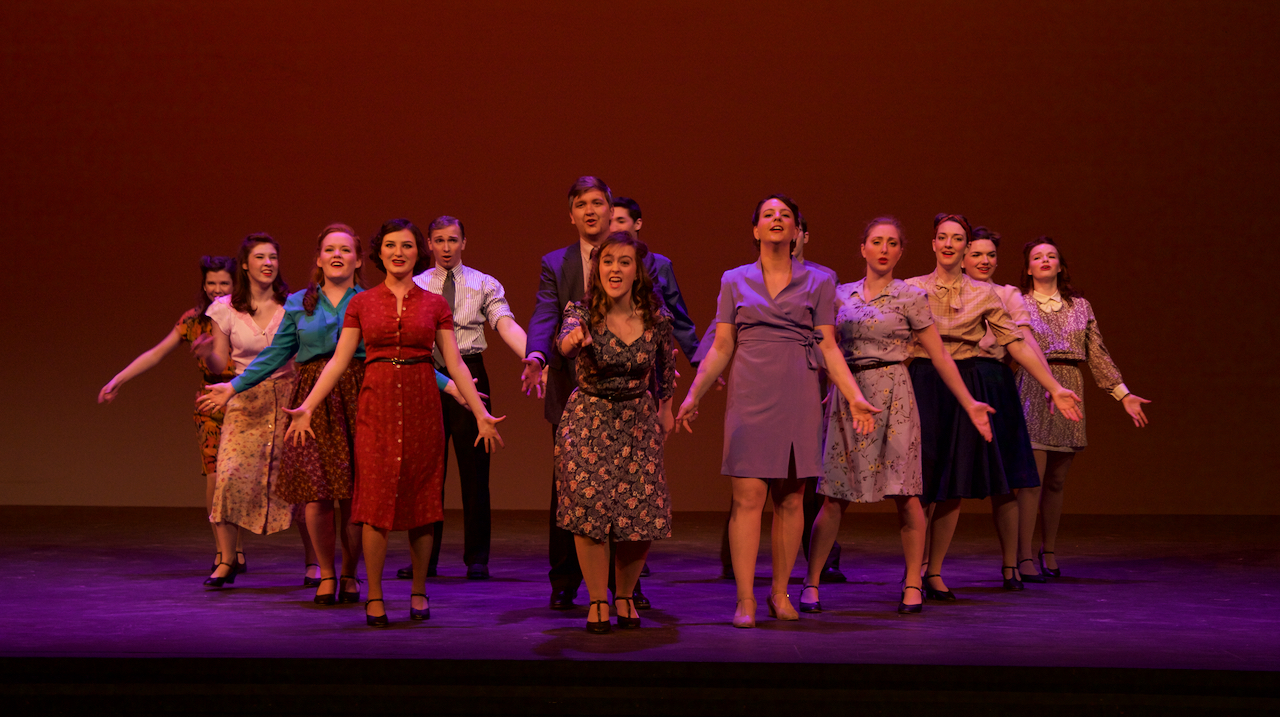 With a complicated love story, a debt to be paid and absolute chaos upon the stage, Sinfonicron Light Opera Company proved that what happens in the theater doesn’t necessarily stay in the theater in their recent production of “Kiss Me, Kate.”

Since its Broadway premiere in 1948, “Kiss Me, Kate” has enjoyed a London production, multiple revivals and won the 1949 Tony Award for Best Musical. The fast-paced show delves into the complicated relationship between actor, director and producer Fred Graham (Aidan Smith ’16) and his commanding ex-wife, Lilli Vanessi (Christine Jacobs ’16) as they play the love interests in William Shakespeare’s comedy, “The Taming of the Shrew.” When a romantic misunderstanding boils over and tensions between the pair rise, the cast and crew scramble to save their opening night before chaos erupts on and off the stage.

Director Tyler Bell ’16 showcased his eye for detail and polish in this thoroughly enjoyable production. Each member of the robust cast demonstrated a great deal of commitment and infectious enthusiasm that led to numerous captivating scenes and very few dull moments. Choreographer Keaton O’Neal Hillman ’16 use of spacing and levels to create dynamic patterns added flair and momentum to musical numbers such as “Too Darn Hot” while costumes designed by Maddie Dippold ’16 simultaneously captured the style of the 1950s and each character’s unique persona. The orchestra, under the direction of Arjun Malhotra ’17, was powered by a bold brass timbre and admirable precision throughout the production.

When a romantic misunderstanding boils over and tensions between the pair rise, the cast and crew scramble to save their opening night before chaos erupts on and off the stage.

While every member of the cast gave a commendable performance, several actors presented their characters with especially memorable resonance, including Conor Wilson ’19 as Fred’s endearing assistant, Paul, Dereck Basinger ’16 as Lilli’s rigid and politically ambitious fiance, General Howell and Lauren Burnett ’18 as the cool under pressure stage manager, Ralph. Undoubtedly, the most surprising and pleasing performances came from Jacob Miller ’18 and Alex Bulova ’19, two gangsters who find themselves thrust into the spotlight, but jump at the chance to sing, dance, crack jokes and the occasional skulls in “Brush Up Your Shakespeare.”

As the less than harmonious love interests, Jacobs and Smith never failed to deliver sharp lines that elicited constant chuckles from the audience. Jacobs’ strong operatic voice and impressive range proved fruitful in “I Hate Men” while Smith proved a worthy counterpart in “Where is the Life That Late I Led?” Gillian Giudice ’17 showcased her flirtatious dancing skills and sultry singing voice as Lois Lane in “Always True To You In My Fashion” while Tiger Ricchetti ’17 as Bill Calhoun played off her energy to produce several sultry moments.

Despite a repeated microphone issue that distracted from several scenes, the technical aspects of the show ran smoothly. Lighting elements were appealing and operated in sync with the orchestra and stage crew during scene transitions. An appealing variety of props and furniture added a richness to each scene.

With an abundance of spirit, Sinfonicron Light Opera Company put forth a performance that combined all of the deliberate nuances that define quality theater. With a great deal of talent, the director, cast and crew proved that determination and an eye for detail are the greatest assets any production can have.