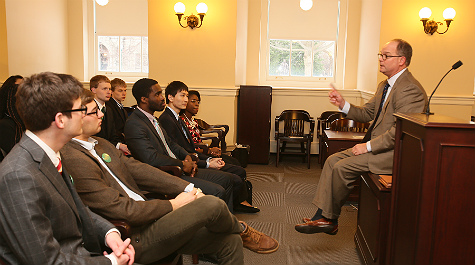 A charter bus carrying College of William and Mary students departed Tuesday Jan. 26 for a day of meeting legislators, touring and networking in Virginia’s capital.

The 20th annual Road to Richmond Trip took students of all disciplines to Virginia’s General Assembly building to lobby legislators on behalf of the College. Organized primarily by the President of the Class of 2017 and Office of Government Relations intern Katherine Ambrose ’17, the event equipped nearly 60 students with green and gold M&Ms, legislators’ office numbers and a list of the College’s 2016 priorities.

The College’s 2016 General Assembly Session priorities include planning money for the first phase of a Fine and Performing Arts Complex. However, Virginia Governor Terry McAuliffe only recommended more funding for additional STEM facilities.

The College also seeks funding for the Center of Recurrent Flooding and Resiliency, a partnership between Old Dominion University and the College’s Virginia Coastal Policy Center to research sea level rise, to support ongoing building projects and an Engineering and Design initiative and to expand eLearning.

The Sunday before the trip, College President Taylor Reveley encouraged students to enjoy themselves, thank the legislators with the M&Ms or “W&Ms” and take advantage of the opportunity to speak with legislators.

“I always hear that the William and Mary students, when they roam the halls of the General Assembly, are more impressive than other schools’ kids,” Reveley said. “That’s because you all are smart, nice, charming. So, stay in character. Be smart, nice, charming. That’ll matter a lot more than what you actually say. Just be yourselves, in short. Be William and Mary students.”

On the way to Richmond, Hannah McKiernan ’17, who interned for Senator John Miller (D-1st) during the spring of 2015, explained the layout of the General Assembly building to the students and described how to find the legislators’ offices.

After arriving at the General Assembly building, the Road to Richmond team congregated in rooms to watch a live stream of the House and Senate Sessions and discuss lobbying strategies. Students broke off into small groups, researched their assigned legislators, and rehearsed quick speeches.

After the sessions ended, students dispersed to meet the legislators by their offices.

Emily Walker ’16 and Katie Conley ’16 met with the chief of staff for Speaker of the House of Delegates William Howell (R-28), the delegate for Conley’s district. As seniors, the two said they wanted to take advantage of the opportunity to go to the General Assembly.

“This is an event I’ve known about since my freshman year and I’d always wanted to participate,” Walker said. “I’m a government major so I was interested in seeing hands-on the state government process. It’s never really been convenient with my schedule, so I was like senior year, last opportunity, I don’t care if I have to miss class.”

Although students touched on some of the College’s priorities, they mostly spoke about the importance of mental health and sexual assault awareness.

“I think it went really well, actually better than I expected, and we were able to have very gratifying conversations,” Walker said.

Meanwhile, Kathleen Bryant ’18 had the opportunity to meet Delegate Mark Levine (D-45th) as he prepared to defend House Bill 995, a bill to allow localities to adopt their own minimum wages.

After leaving the General Assembly building, the student lobbyists crowded on the steps of Virginia’s Executive Mansion, the residence of Virginia Governor Terry McAuliffe, to wait for the governor to arrive for a photo.

After smiles, handshakes and words of encouragement, students were welcomed into the mansion by McAuliffe himself for a tour and a history lesson.

Ambrose said she was pleasantly surprised by the governor’s extended visit.

“It was so spur of the moment and wonderfully gracious of him,” Ambrose said. “I was expecting more of a meet and greet, photo, maybe shake a few hands and he would have a lot of work to do and leave us, but he was polite and he definitely took the time to answer some more questions and invite us into his literal home, which was so awesome. And in case people didn’t think the political side actually had real people behind it, I think that’s what they got to see.”

After the tour of the Executive Mansion, students met Monty Mason ’89 (D-93rd), a former government major at the College.

He talked to the students about current bills, life as a legislator and students’ connection to the legislative process.

“This is a crazy life to lead,” Mason said. “And you may or may not want to lead it. But there’s some issue that we will touch on this year that you care about. Something that’s important, whether it’s to your family, your life, your future job, your community, or something you’re passionate about, we are going to touch on it.”

The Road to Richmond team then walked to the Library of Virginia where they were treated to a reception with Reveley, legislators, members of the administration and alumni.

We’ve got great programs in music, theatre, dance, visual arts. They are doing their respective things in facilities that even a dog would regard as inadequate. We’ve got to do something about that. — College President Taylor Reveley

Students listened to Reveley give an address to the crowd.

Reveley thanked the General Assembly for supporting the Lewis B. Puller, Jr. Veterans Benefits Clinic at the Marshall-Wythe School of Law and encouraged them to fund the planning of Phase One of the proposed Arts Quarter.

He noted that the College has already funded STEM programs.

“We’ve been building STEM buildings, science buildings, like crazy ever since the turn of the century and we’ve done a great job of that,” Reveley said. “Since we’ve really gotten into the building of STEM facilities, the number of STEM majors at William and Mary has increased by 55 percent.”

However, he said the College needed to transition funding to the arts.

“We’ve got great programs in music, theatre, dance, visual arts,” Reveley said. “They are doing their respective things in facilities that even a dog would regard as inadequate. We’ve got to do something about that.”

Hours after the sun had set, students boarded the bus to travel back to Williamsburg, full of food from the reception and stories about their lobbying experiences.

Ambrose said she was pleased with the result after months of planning, coordinating with legislators, running busses and advertising to the student body.

“It was a lot,” Ambrose said. “But it turned out to be very successful in the end.”