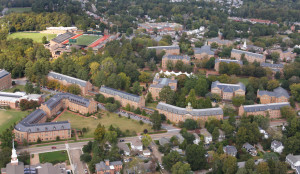 The College of William and Mary’s Board of Visitors’ Committee on Audit and Compliance convened Thursday to discuss sports camps and institutional compliance priorities regarding safety and security, civil rights and research.

Auditor of Virginia Public Accounts Manager Brad Hypes said the audit detected no signs of fraud, although he noted that the audit did not specifically look for illegal activity. He said most significant change in accounting policy is the change in pension reporting standards.

“You may have noticed in the financial statements significantly liability in that regard,” Hypes said. “That’s a result of GASB 68 and 71. You’ll also note, probably when we get to our report on internal control, that we did a significant amount of testing in that area, as required by the standards as well.”

Governmental Accounting Standards Board statement 71 amends GASB 68, eliminating understatement in the beginning net position and expense in the accrual-basis financial statements of employers.

Director of Internal Audit Kent Erdahl ’83 then presented his report, which focused on College of William and Mary sports camps.

“Sports camps aid in athletic recruiting and help to promote the William and Mary community,” Erdahl said. “Sports camps also provide coaches the opportunity to supplement their income. This is part of the arrangement we have with most of the coaches.”

Erdahl noted that some universities treat camps as independent, while others bring them in hours. At the College, the coaches own and operate the camps, but in some employment practices, marketing, financial and administrative support indicates the College owns the camps. He suggested that the camps be more clearly labeled as independent.

“The coaches own the camps but William and Mary’s name and reputation are on the line,” Erdahl said.

Erdahl said that assistant coaches have been working the camps for the benefit of the head coach instead of fulfilling their position at the College.

BOV member Ann Green Baise asked whether or not there is a set date that the camps are expected to develop clearer indicators of their status.

“I guess, do you need some muscle from the Board to say this has got to stop and it’s got to stop now because you’re putting the College at risk? So get your act together and let’s do it the right way?” Baise asked.

Committee Chair John Thomas determined that Erdahl would alert the BOV when a solution has been worked out with the athletics department.

Chief Compliance Officer Kiersten Boyce then presented a compliance report to the committee. She said that there have been 16 reports of sexual assault from in FY 2015-16, with seven Title IX Review Team reports to either the Commonwealth attorney or local prosecutor. Five of those reports have been investigated so far.

The average number of days between sexual assault incidents to reporting was 124, with outliers eliminated 70 days with a range from 0 to 543 days.

Boyce reported that there have also been 14 administrative investigations of 32 Title IX/VAWA Reports in FY 2015-16.

Boyce clarified that investigations do not occur when no further action is requested, protective measures and support only are requested, or remedial action and monitoring is deemed appropriate.

“There is always a balance. We have weekly meetings where were discuss our investigations. As we go through them, there are a few where we question whether or not we should have conducted an investigation on a certain case,” Boyce said. “The position we’d like to be at this point, where our society and our nation is at, we don’t want to be in a position where we say we wish we had investigated that … It’s preferable to have a couple where we say, maybe we didn’t need to investigate that.”