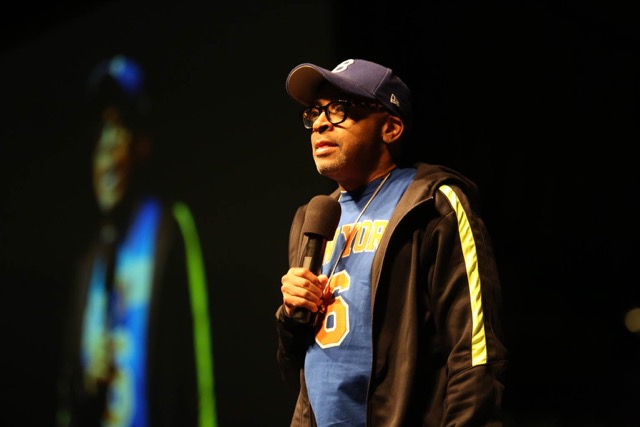 On April 20, Kaplan Arena filled with students, faculty and community guests all eager to listen to film director and political activist Spike Lee. The crowd got to hear Lee’s thoughts on topics as serious as race relations in America to ones as lighthearted as the Knicks’ odds for next season.

Lee appeared as the speaker for the College of William and Mary’s 2016 Atwater Lecture. The Lecture, organized by the Alma Matter Production (AMP) Committee on Contemporary and Cultural Issues, draws a big name guest to campus every April. Last year, that guest was comedian and actor Jeffrey Tambor.

Talya Stanke ’18, a member of A.M.P.’s Committee on Contemporary and Cultural Issues, said that every year for the lecture the committee comes up with a list of people they think would make good speakers and reaches out to their agents. Lee, Stanke said, quickly expressed interest in coming.

“We wanted to bring someone who we thought college students would be really interested in hearing and someone who could talk about something that students have a desire to talk about,” Stanke said.

Lee started his talk by drawing on his own experience as a student. He attended Morehouse College, a historically black college in Atlanta. He said he was a “D-plus and C-minus student” his first two years of college, unsure of what he wanted to do.

It was the summer before his junior year of college when Lee discovered filmmaking. That summer in 1977, a friend gave him a camera, and Lee spent the summer filming three major events that happened in New York: the famous two-day blackout, the Son of Sam shootings and the disco craze he saw on the streets of Brooklyn. Coming back to college in the fall, he turned the film he had into a documentary with the help of one of his professors, a man he credits with helping him realize his passion.

“If you’re successful, there’s always one teacher that believed in you, saw something in you,” Lee said.

After making the documentary film, called “Last Hustle in Brooklyn,” Lee said he knew being a filmmaker was his ultimate goal. He advised all the college students in the audience to choose a career based on what they love, rather than what might bring them the most money, even if success seems unlikely.

Lee said his family, who are mainly artists as well, never questioned him despite the lack of representation in Hollywood at the time. He said their support helped convince him he would make it.

Lee said while he was hopeful, he was also aware that he had work to do. Rather than trying to go right into the industry, he applied to film school, something he saw as necessary for himself to succeed.

Lee took the GRE before he applied, but failed the test. Luckily, New York University’s Tisch School of the Arts still accepted him based on his previous work. In his class of 50 people, Lee said, there were only four people of color. One of them, Ernest Dickerson, became his close friend and a cinematographer who worked with Lee on his movies “Do the Right Thing” and “Malcolm X.”

“[Ernest and I] grew up in a generation where your parents told you everyday, ‘You have to be 10 times better than your white classmates,’” Lee said.

Lee said his mother, an English teacher, would mail the letters he wrote to her during college back to him with corrections on them. His parents and the hope they had for him helped him reach where he is today, though, he said.

At this point in his talk, Lee began discussing the 2016 Oscars. The Academy of Motion Pictures Arts and Sciences has been criticized two years in a row for failing to nominate any actors or actresses of color, spawning the hashtag #Oscarssowhite. Lee decided to boycott the Oscars because of this, even though the Academy had honored him in the past year.

“This year, I was lucky enough — not lucky enough, I deserved it — to get an honorary Oscar for my body of work,” Lee said.

His disappointment when the nominations came out was enough to keep him away from the February ceremony, which honorary Oscar recipients usually attend. He said that he hopes the Academy and other areas of Hollywood will improve in the coming years, emphasizing that most of the problem lay with studio executives.

Lee then answered questions, both ones submitted by students online before the talk and ones from the audience. The students and audience used this opportunity to ask Lee more on his thoughts about racial tensions in the U.S., one of the main reasons why Stanke said her AMP committee thought he would make a good speaker.

“There’s a desire to have a conversation about issues society continues to face, like race relations, for example,” Stanke said. “So I think we thought Spike would be a great example to talk about race relations in society.”

The first question asked Lee if he felt that black students should go to historically black colleges, like he did, rather than predominantly white colleges that needed them to fill their “diversity quota.” Lee used the opportunity to talk about race relations in general in the U.S., referencing the Ferguson and University of Missouri protests that occurred last year. He encouraged students to take action against injustice while also continuing on their own path to success.

“If you are a student of color, you can’t let that stuff get yourself off your game,” Lee said.

Lee also answered several questions about his films, especially “Do the Right Thing,” a movie that deals with racial tension and police brutality in Brooklyn. The film is currently part of the syllabus for the College’s Intro to Film & Media Studies class.

“Black Lives Matter is not saying only black lives matter. It is saying all lives matter,” Lee said.

“In the three sections I’ve taught over my first year, I’ve found that ‘Do the Right Thing’ stands out as the film that provokes the strongest participation in our class discussions,” Professor of Film & Media Studies Professor Stadelmann said in an email. “The main reason being that it addresses the ongoing issue of racial tension in the U.S.”

When asked if he thought race relations had improved or gotten worse since the release of “Do the Right Thing,” Lee said he was struck by the similarity between the death of Eric Garner at the hands of the police in 2014 and a scene in the movie where a character is choked by a cop until he dies. He said he hoped people would look to the Black Lives Matter movement for education on these issues.

Lee, moving to talk about his political views, said the amount of gun violence and the hate Donald Trump has been promoting in his campaign has made the country “a very, very dangerous place.” He said that he supported Bernie Sanders and was happy that Sanders appeared to be pushing Hillary Clinton more to the left side of politics on many issues.

Lee was also asked about his thoughts on the Knicks for next season, a question that multiple students had asked variations of online. He said he thought a lot depended on who they chose as a new coach, then asked to move back to other topics.

“That will be the last question about the New York Knicks today,” Lee said, after mentioning Kurt Rambis would possibly be the new coach.

The last two questions of the night brought Lee back to the racial segregation of Hollywood. He emphasized “dedication” as key to breaking into the exclusive world of entertainment, but said the question often came down to money and funding.

Though Lee said that finance was a major obstacle, he ended the talk on a hopeful note, referring to a future project that managed to overcome that hurdle.

“There’s a film coming out next fall that’s gonna win the Oscar — best picture. It’s called ‘A Birth of a Nation,’” Lee said.

Lee then thanked the crowd and offered to stay for autographs. While some of the audience stayed, others left, continuing to talk about Lee’s story as they headed out of Kaplan. Francesca McConnell ’16, head of AMP’s Committee on Contemporary and Cultural Issues, said that she thought Lee’s story would continue to resonate with most college students, especially those who may be unsure about their passion at first.

“Students, particularly students at such a rigorous school as William & Mary, are constantly concerned with achieving the conventional conception of success,” McConnell said in an email. “Many times without conceptualizing success for themselves. His story argues that we can, and should, forge our own paths to personal success.”