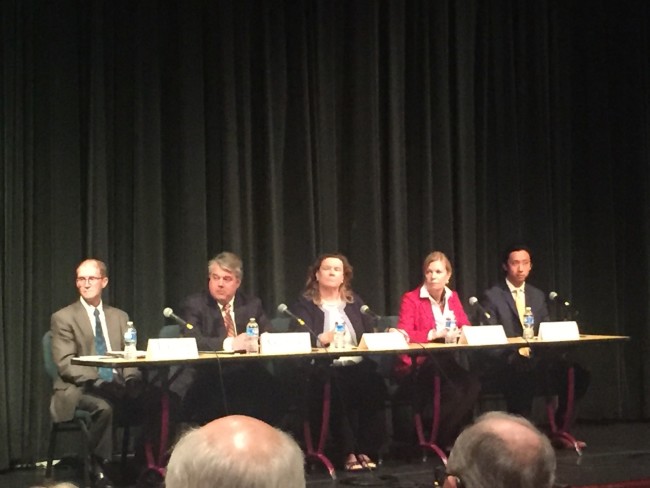 With exactly one week remaining until the May 3 election, the five Williamsburg City Council hopefuls lined up at the city’s public library Tuesday April 27.

With only three seats up for grabs, the debate hosted by the Williamsburg League of Women Voters gave community members the opportunity to press candidates about their viewpoints on various issues related to the city.

The debate began with brief introductions from moderator Jim Nickols. Jumping immediately into questions, each candidate received 60 seconds to craft their response.

In response to how their backgrounds would allow them to serve well on the City Council, each candidate appealed to their assets.

Economics professor and Williamsburg Planning Commission member Elaine McBeth focused on her expertise as an economist and analyst, laying out her three main interests in the upcoming election: economic development, education and neighborhoods.

After thanking the League of Women Voters for hosting, long-time Williamsburg resident Barbara Ramsey ’75 focused on her business background both in Williamsburg and abroad and the skillsets she has gained through that experience.

“I think my biggest skill set and accomplishment is my ability to work with people of all backgrounds,” Ramsey said.

College of William and Mary student Benming Zhang ’16 appealed to his time on the Public Housing Advisory Board, saying it has given him a broader perspective on Williamsburg issues that he will carry in to City Council.

“My service on the Public Housing Authority has given me an in-depth perspective on the situation with the homeless, the area in the community we often don’t see, that large and well-rounded perspective will help me guide and form my decisions and perspectives,” Zhang said.

Vice Mayor Paul Freiling ’83, the only incumbent candidate, highlighted his experience in office and laid out some of the basic interests of City Council: providing quality utilities, education and infrastructure. In office through the Great Recession, Freiling discussed the tough decisions and teamwork necessary to get through the difficult economic period.

Lifelong resident and landlord Greg Granger cited his “hands-on” experience as a landlord and business owner as what qualified him to serve on City Council.

The next question focused on the economic state of Williamsburg, a contentious issue in the City Council election.

Ramsey proposed expanding sports tourism, maintaining low taxes and high services. But to her, the city is doing well economically.

McBeth took a middle path, saying that although the city’s economy has improved since the recession, Williamsburg can do better.

“I think that most of us are feeling that it is pretty good, but clearly it could be better. One of the cornerstones of my campaign has been economic development,” McBeth said. “Through my time on Planning Commission we had many projects that were put through that almost were put online, now City Council needs to do everything it can do to get those online. It is important that we have the push behind those as we move forward. The idea that we have a focus not only on economic development but on the housing that would allow people to live here.”

Turning to the state of the community’s primary and secondary education, candidates agreed that the City Council should work closely with and support the Williamsburg-James City County School Board.

A “cornerstone” of the community to McBeth, the candidates agreed that having strong, competent elected officials would allow for a high quality school system.

“I think it is important City Council continues to communicate with the joint school board,” McBeth said. “I think we need to continue to support educational goals and initiatives that school board lays out. City Council needs to have an open mind in backing the initiatives.”

Ramsey agreed financial support for teachers and school programs is crucial in order to attract families to the area.

The discussion then turned to the Arts District. All candidates agreed that a vibrant Arts District would be an asset to the community, but the candidates diverged in their views of the project’s success.

Freiling, who took part in planning the initiative, discussed the background of the Arts District. Made for the creative economy, the city gives tax incentives to tenants.

“We originally planned to have an arts complex where artists could live and work in the same space … there wasn’t enough demand in our community to make that work,” Freiling said. “We provided tax incentives so that people in the creative community could come into a property, as a property is redeveloped, they get tax incentives on that redevelopment to make it work. From an economic development standpoint, that has worked.”

McBeth noted that the initial interest in the Arts District stalled during the Great Recession, but now that the economy has improved, Williamsburg needs to reinvent.

Granger took a different approach — appealing to his earlier support for an Arts District near Merchant Square. On Richmond Road, he said, the artists have had a difficult time being successful without street traffic.

“The city has not created an arts district,” Granger said. “The city designated an area as a place where you can get tax incentives for opening an arts business. It is incumbent upon the arts to create the arts district. I initially came out and suggested that the arts district was down in this area where there was parking, vibrancy, restaurants. This seems like an arts district here right now. We will need parking, pedestrians, interesting restaurants, and we will have to have art. It is disheartening to see artists pour their resources into the businesses and fail.”

Zhang agreed, explicitly saying that the Arts District has failed. Now, he said that the city has an opportunity for reinvention, citing the Williamsburg Shopping District as an area for growth.

A main issue in the debate referred to the relationship with Williamsburg’s largest entity — the College of William and Mary.

McBeth and Freiling agreed that town-gown relations have improved greatly over the years, focusing on the ability to work together with the administration and residents in the community.

Although Zhang agreed the relationship has improved, he proposed going further by bringing Williamsburg to the College. Focusing specifically on bringing representatives of different Williamsburg entities with “face-to-face” relationships between the entities, he said that he would be able to facilitate this change.

Moving into the second portion of the debate, audience members were given the opportunity to write questions on index cards for the moderator to ask the candidates.

The first question from the audience focused on the College’s purchase of the single family dwellings on Jamestown Road and the College’s plans to tear them down in the future. Zhang highlighted the crux of the issue; because the College owns the properties, they are under the state’s jurisdiction.

Freiling expressed his dislike of the possibility of demolishing more explicitly.

“This is a real shame, that concept goes against the framework of the community when it comes to architectural preservation,” Freiling said. “The good news is, when I talked to president Reveley, his response is that they have no plans on the immediate horizon to it, they have way more pressing priorities. We have to approach this conversation, we can’t threaten them, and we have to convince them of the values and the histories.”

The debate then centered around the plans to build a fourth Williamsburg-James City County middle school at the James Blair site. Candidates agreed that re-zoning was inevitable and took pragmatic approaches, saying it will be handled carefully and with much discussion.

However, Granger, as a parent of a middle school daughter, recognized rezoning is difficult for the kids.

“Rezoning is scary, you lose control,” Granger said. “Losing control after you have invested in a house is a scary thing. We have to be sensitive to the families’ needs, it is an unfortunate time. The upside is we are getting a great school.”

The questions circled back to off-campus housing, this time on the three-person rule. Most candidates agreed that the rule was up to renegotiation and more discussion, while recognizing safety and health standards are important as well.

Zhang, on the other hand, provided a dissenting voice.

“I will answer this in terms of our holistic inspection program,” Zhang said. “It is outdated, it is unfair, and not just to students. It is unfair to our entire community. It is very nice to think that and to assume that a landlord would rent to just three students, but there are more than three students’ living in some houses. That is unfair to the neighborhood but it is unfair to the students living there because they will be the ones punished. I think we need to be able to hold the landlords accountable, not just with a website.”

In regards to the noise ordinance, the candidates agreed that the current policy is currently strong.

Instead, she advocated for stronger neighborhood and community ties.

Ramsey agreed that the noise ordinance was effective as is.

The candidates then used their closing statements to summarize their campaigns’ objectives.