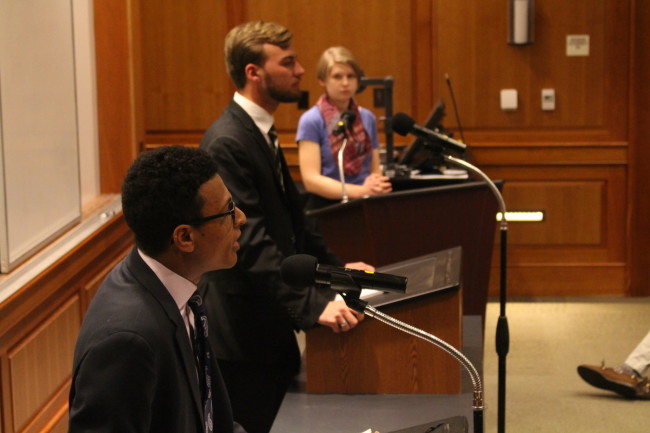 Two months after the inauguration of U.S. President Donald Trump, the College of William and Mary is voting for a new Student Assembly president. In these two months, the campus has been the site of protests, letter-writing campaigns and efforts to spread awareness about how federal policies could impact international students and those students protected under Deferred Action for Childhood Arrivals.

According to SA presidential contenders Elijah Levine ’18 and Chairman of the Senate Danny O’Dea ’18, these policies have, in some ways, shaped their campaigns. Each has worked with student groups addressing policies like Trump’s executive order, which created a 90-day ban on immigrants from seven Muslim-majority countries.

Both candidates have platforms that specifically address the College’s role within the international community.
“The political climate has left a lot of the members of our community uncertain as to their place in it,” O’Dea said. “I have spoken on this in the past; no one on this campus should ever feel that they are not welcome for any reason at all, no matter their beliefs or culture or background. William and Mary is a place for everyone who wants it, and we want to make sure that no one questions that.”

Levine and his vice-presidential running mate, Sen. Annelise Yackow ’18, have a section of their platform dedicated to diversity, which includes their goals for supporting international students. If elected they’d like to hold the College accountable for supporting the City of Williamsburg’s proposed refugee resettlement resolution, securing DACA provisions and becoming a sanctuary campus for undocumented students.

In these last two months, the College has published information through the Reves Center for International Studies on how it would respond to a request to comply with a federal warrant or other immigration matters. The College has also signed the second iteration of a letter, drafted by college presidents, declaring their support for an end to such executive orders.
However, according to University Spokesperson Brian Whitson, because the College is a state institution, it will follow the Virginia General Attorney’s guidance for becoming a sanctuary campus, which is not something Whitson said is possible according to current guidance.

“As you know, W&M is a state institution, and if there are changes in the DACA law, we’ll look to Virginia’s Attorney General for guidance,” Whitson said in an email. “In the meantime, we will continue to provide our DACA students with as much support as we can. I want to be clear that it has long been our policy that unless we are required to by law, such as being asked to comply with a federal warrant, our police do not get involved in immigration matters nor does the university release immigration status of students.”

Levine said that while he knows it is unlikely the College could stop a U.S. Immigration and Customs Enforcement agent, he believes discussing the College’s status as a sanctuary campus is an important conversation to have.

“From my talks, especially with Amnesty, I have seen that there is an important aspect that speaks to the cultural aspects of our platform,” Levine said. “There is a lot to be said for an institution, or at least the student body of an institution, to pronounce its support of undocumented students and accept their legitimacy on this campus. We have the responsibility to fight for this, while also being aware of the realities.”

The City’s refugee resettlement resolution is something that was first introduced in the City Council with support from Amnesty International before November’s U.S. presidential election. If passed, it would codify the City’s support of welcoming refugees into Williamsburg. Yackow said that one factor for a delay in passing this was pushback from Williamsburg residents who were not in support of the resolution.

Yackow said that if elected, she and Levine believe that because students make up approximately 33 percent of Williamsburg’s population, they should be able to advocate for City policies. While this resolution was initially brought to SA President Eboni Brown ’17 for support, Yackow said that the time is better for SA support now, because it is more removed from the election and inauguration of Trump.

While Levine said that Trump’s inauguration has influenced what was prioritized in his platform, he thought it was important to acknowledge that many communities, like those of people of color, were not surprised by Trump’s election.

“The last few months have put a premium on things like DACA and refugees,” Levine said. “Those are continuations of things that people have been putting their fingers on for a long time. There have been communities speaking out against these. There had always been a place for this, Trump or not, for a People’s Report, not just because it has never been a staple of the greater majority society. So at the heart of it, I don’t think the platform is a reaction to Trump, but those pieces are.”

“Ignoring the climate change after Trump’s election would be silly,” Srikanth said. “It has impacted us and our close friends and other people on campus … what our platform and our slogan represents is the idea that we want to make sure that no matter what is going on, students know that their peers and the student body is here for them. What’s going on in the White House has a direct impact on their education, they should feel supported by their peers and by the administration.”

One student, Nairuti Shastry ’17, who is leading the College’s Books Not Bombs campaign, said she worked with O’Dea to help shape this amendment to his platform.

“He was really receptive to the idea that an education at an institution like William and Mary needs to be as accessible as possible,” Shastry said. “A lot of the current platform relating to international students was relating to outreach. Danny and I are working to craft something in terms of accessibility, not just financial accessibility. They don’t want to put something in there that is not necessarily going to be accomplished in just one year, so we want to talk about the general campus culture and how SA can work with admissions to make sure that these programs and the great things that they offer here are as accessible as possible. In terms of what Books Not Bombs and me as an individual hope to see moving forward, we want individuals not just committed to William and Mary as it stands, but growing it as an institution moving forward.”