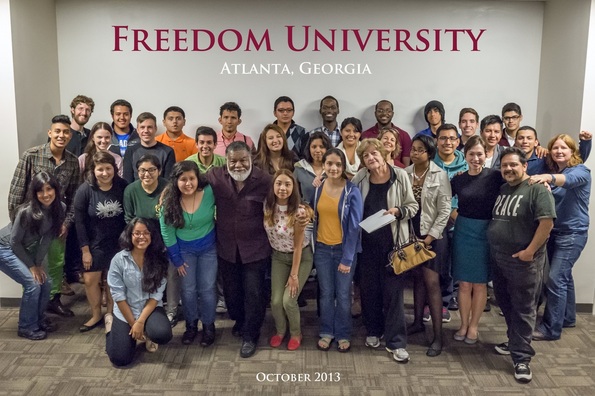 Wednesday, April 12, the College of William and Mary kicked off the third of three campus COLL 300 presentations on “Inclusion and the University” with a presentation by Executive Director of Freedom University Emiko Soltis. Soltis was accompanied by Rafael, Mileidi and Irene, three students from Freedom University whose last names are being withheld because they are living in the U.S. illegally. The theme of this session, coordinated by Hispanic Studies Program Director and professor Silvia Tandeciarz, was “unrest.”

Freedom schools were alternative, temporary free schools in the South for African-Americans during the Civil Rights Movement. Freedom University is inspired by these schools and provides a tuition-free education for undocumented students banned from higher education in Georgia.

“I started teaching as a volunteer professor back in 2013 and my experience specifically with student labor activism and civil disobedience came in handy when students wanted to be more engaged in terms of coming out of the shadows, not just going to a secret school,” Soltis said. “I have 40 incredible students in my life every semester who change me, and I also have the opportunity to have a really big impact on their life, not only as a teacher but as somebody who absolutely affirms their humanity and their dream of going to college — their dream of doing anything that they want.”

Soltis discussed the foundation and principles of the university. Freedom University provides tuition-free, college-level classes, application assistance and leadership development for students living in the United States illegally who are denied higher-level education. Its mission statement begins, “We believe that all human beings — regardless of race, ethnicity, class, religion, gender, sexual orientation or citizenship status — have a right to education.”

The university first opened its doors in 2011 to combat the passage of Georgia Board of Regents Policies 4.1.6 and 4.3.4, which ban youth living in the United States illegally from attending Georgia’s top five public universities and from receiving in-state tuition. According to their website, the implications of these policies are a prime example of modern era segregation in southern educational facilities.

Soltis joined Freedom University in 2013 as a volunteer professor and is now the executive director for the university. Having spent most of her twenties working with immigrant communities fighting for immigrant rights with migrant farmworkers, Soltis said she was more than qualified to take on a role fighting for students living in the United States illegally.

I think what’s also rewarding is being able to see that it’s not just theory of social movements or that young people can change things, but to actually be a part of a movement that’s transforming a national dialogue on a very important issue: creating change step by step though changing private university admission policies to winning gains on these discriminatory laws to changing culture,” Soltis said.

“I think what’s also rewarding is being able to see that it’s not just theory of social movements or that young people can change things, but to actually be a part of a movement that’s transforming a national dialogue on a very important issue: creating change step by step though changing private university admission policies to winning gains on these discriminatory laws to changing culture,” Soltis said.

During the presentation, the presenters, who were all born in Mexico, shared a glimpse into the life of students living in the United States without legal permission.

Irene crossed the U.S. border first at age one, then again at age three. For her second journey to the United States, she and her mother used borrowed Visas: Irene, per her paperwork, became a boy and her mother became her aunt.

Rafael, who crossed the border around the age of six, said he recalled always being aware of his lack of documentation. He said it robbed him of childhood pleasures and socialization as a young adult. Rafael said that while getting pulled over while driving is next to nothing for most people, for him it would have resulted in being ripped from the arms of his family and dumped in a country he knew nothing about.

Mileidi discussed similar feelings as Rafael, particularly the embarrassment that came from constantly fabricating excuses as to why she could not do seemingly normal things and the fear that accompanied everyday actions.

Irene said her visit to the College was “what would have been the college experience for me.”

As a result of the Georgia laws, many youths who entered the country illegally do not get a college experience. The plan for many of these students is to go straight into the work force after graduating from high school. The presenters said that the Georgia Board of Regents Policies 4.1.6 and 4.3.4 deny the human right to education to students living in the United States illegally.

“Freedom U is an institution that helps undocumented students get into college,” Mileidi said. “It teaches about activism and how we can become more involved in our communities, how to successfully plan and execute an event. It brings a sense of community to undocumented students; it helps us feel more normal, more like students.”

The Freedom University students were housed and accompanied by students from the College’s Border Studies Program. Students like Grace Norwaldy ’17 went on a one-week trip to Tucson, Ariz. to learn about the border crisis first-hand. The students talked to lawyers and activist groups, and visited a detention center to get an “on-the-ground perspective” of the issue.

“The organization that sponsored us, they’re kind of motto is, ‘Come to Tucson, see what it’s like here, then go back home and act somehow’,” Norwaldy said. “This was our action when we got back, to host the Freedom University students. I think what’s been really striking to all of us is that they’re — I don’t want to call them normal kids, but like they’re anyone I would know here.”

During a question and answer session at the end of the presentation, one individual brought up the possibility of professors at the College teaching classes online for Freedom University. The panel said that the best way for people to get involved and assist the movement is to be informed allies — to research and read up on immigration conditions and laws, then sit down with family, friends and peers and spread the knowledge.

No matter who you are and no matter where you are there’s something you can do to help,” Norwaldy said.

“No matter who you are and no matter where you are there’s something you can do to help,” Norwaldy said.

At the end, Freedom University representatives thanked the faculty and staff of the College. The thanks were complemented by pleas for those in attendance to sit down with someone and discuss what they had learned from the presentation and spread the word of Freedom University and its mission.

“[People] should just treat us like humans,” Irene said. “Have respect for other people, do not just assume they are immigrants. Treat us normal, because we are all human beings.”