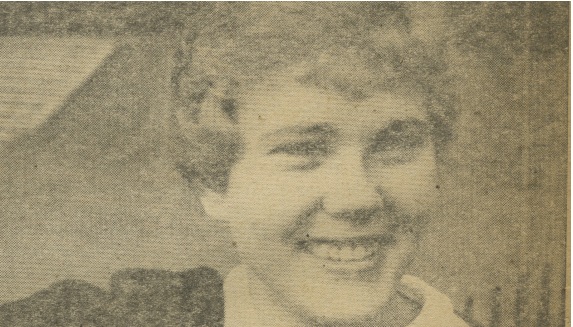 The headline tells you almost everything you need to know. Carol Evans, a 1962 Flat Hat Student of the Week, apparently couldn’t get all her Tribe (Indian, at the time) Pride out naturally. So her doctor gave her some “pep pills” and a “special energy ointment” to keep her in peak form on the sideline at football games. Hopefully they weren’t too strong, because taking pills “every hour on the hour for 48 hours before each game” sure does sound like a lot. Also discussed: student apathy for sports (some things never change), and communism in Berlin. Read the full story below.

“Where do I get my energy? Well, I went to my doctor and he gave me a prescription for pep pills which I take every hour on the hour for 48 hours before each game. Then, a half hour before game time, I rub on a special energy ointment!”

So quips perky Carol Evans in answer to a perennial campus question. Fans at William and Mary games never fail to marvel at the boundless energy of the pretty, preppy, blonde cheerleader from Jacksonville, Fla.

Carol, who is originally from Alexandria, cheered at Hammond High School and has been stirring up enthusiasm ever since then. “It’s my way of letting out suppressed emotions,” she laughs. “I enjoy it — I really do.”

Regarding the question of school spirit, Carol feels that “the heart of the problem is the student body. If we could start with class competition, spirit might spread. When I see 11 players working and sweating on the field, I feel the least we can do is cheer for two hours.:

An economics major, Carol is a Dean’s List student and a member of Sigma Delta Pi, national Spanish honorary fraternity.

She is active in Pep Club and intramurals and has also been a member of Mermettes. Kappa Kappa Gamma social sorority claims Carol as float chairman and assistant social chairman.

Carol spent her summer traveling with friends in all of western Europe except the British Isles. Although she has eight years of studying the Spanish language to her credit, Carol found herself putting her one year of French to more profitable use!

One of the most surprising aspects of her trip was an unexpected encounter with two other William and Mary Kappas at the Vatican. The most unforgettable impression Carol received was “seeing what Communism has done in Berlin. It is something you have to see in order to feel. Those people were so poor and suppressed. It was really pathetic.”

Carol has no definite plans for the future after graduation in 1964, but she is considering graduate study.