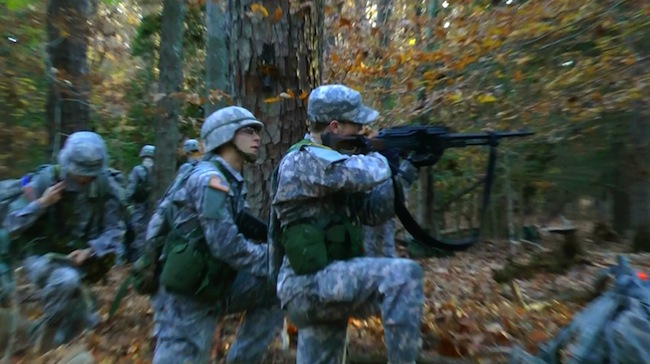 Charles Clouse ’15 says that the early morning wake-ups are one of the hardest parts of the ROTC program at the College of William and Mary. On the days they visit the firing range at Fort Eustis, cadets must gather in Sorority Court as early as 5 a.m.

Clouse decided to join the ROTC program as a “walk on” after meeting several retired officers the summer before starting his freshman year at the College. He says that contrary to the “Full Metal Jacket-esque” stereotype ascribed to military training, ROTC provides a very supportive environment.

“Getting to go to the range is always pretty cool; machine guns are especially fun to shoot, hanging out with other cadets is fun. We’ve [had] a few alumni come in to talk to us, including Robert Gates, and a few of the occasional extra things we’ve done, like rappelling, have been interesting,” Clouse said.

Iain Axworthy ’15 knew coming into college that he wanted to join ROTC and commission as an officer. He says that his fellow program participants have become like a second family.

“As far as my motivation, it was actually kind of selfish,” Axworthy said in an email. “First off, I wanted to help my parents. They have two kids going to [William and Mary] out of state, it’s a huge drain on them. They’ve always been hugely supportive of [me] and I saw a scholarship through ROTC as my first real chance to help them financially as they prepare for retirement. Secondly, every great leader that I interacted with at that point in my life had served in the military. Whatever that experience imparted on them, I wanted it myself.”

Axworthy’s favorite experience happened last summer at the Leadership Development and Assessment Course. The cadets had been training the field for several days when a thunderstorm cropped up, forcing everyone to assume “lightning position.”

“We were exhausted and soaking wet when we got to curl up under our ponchos in the early morning,” Axworthy said. “Me and four of my best friends were curled under two ponchos laying in a puddle. We were shivering so much that … none of us could sleep because of the other folks’ shivering. At that point my buddy whispered, ‘I hate you all so [expletive] much.’ We died laughing. The next day sucked, but my buddies and I had running jokes the rest of the time at camp.”

ROTC cadets participate in physical training sessions that begin as early as 6 a.m. several times throughout the week. They also practice skills with simulations like Situational Training Exercises, which are designed after a light infantry mission. Cadets in their junior year serve as team leaders, while others act as fictional enemy troops. These training sessions often take place in the Matoaka woods and are punctuated by joggers passing through battle lines.

Meant to prepare cadets for leadership roles, these simulations can be grueling. In spring semester of his freshman year, Dylan Farley ’16 volunteered for a training exercise in the swampy, hilly backwoods of Matoaka.

“We were just covered in mud,” he said. “It was raining on us. It snowed. It hailed. We were all just sitting there, freezing. You pull through it and you rely on each other. You laugh about it afterwards. It might suck then, but it’s good training in the end.”

Hunter Gill ’15 says that he knows of few ROTC programs that can hope to match the camaraderie and effectiveness of the College’s program, and says he was inspired to join the program because both of his parents were officers in the Army.

“I was always proud to be picked up from school by my parents wearing their uniforms,” Gill said in an email. “As a senior in high school, it was a natural step to consider and then apply for an Army ROTC scholarship.”

Gill says that one of the lowest moments in his ROTC experience was hearing about the death of Lt. Todd Weaver ’08, an alumnus of the College ROTC program who graduated Phi Beta Kappa and was killed in action in Afghanistan in 2012.

“At that moment, reality set in more clearly,” Gill said in an email. “A high moment for me in ROTC was learning to rappel off of the 60 foot tower at Fort Knox, where we trained in wall rappel and free rappel, using only a simple Swiss seat. I enjoyed it because it made my fear of heights seem trivial.”

Robert O’Gara ’18 applied for a four-year ROTC scholarship. He says that his fellow cadets were the first people to make him feel like he belonged on campus. Despite participating in physically draining challenges that require cadets to train in freezing weather with little sleep, he says that ROTC participants are not much different from other College students.

“I had no idea what was in store for me.”

“We do wake up three days a week for exercise at 6 a.m. and have ROTC labs Wednesday afternoons along with other various training exercises,” O’Gara said. “But ROTC cadets are diverse, just like the students at William and Mary.”

Unlike O’Gara, Gwyneth McKenna ’16 did not always know that she wanted to participate in ROTC. She happened across a flyer for the program freshman year and decided to join up.

“I had no idea what was in store for me,” McKenna said. “I didn’t know anybody; everyone kind of looked the same. It was a completely new experience. Thankfully, everyone was super supportive and eager to help. And if the entirely new environment wasn’t enough, the physical training alone was enough to make most people start running. I remember throwing up in front of everybody on my first morning of [physical training].”

McKenna says that her experience with ROTC has allowed her to constantly surprise herself.

“One of my favorite memories was getting to fire an M16 for the first time,” McKenna said. “I remember thinking, ‘Holy crap — I might actually be kind of good at this.’”

Christian Nott ’16 intended to join Coast Guard Academy but was medically discharged for a slight case of color blindness a few weeks into boot camp. He enrolled at the College instead and joined ROTC.

“One characteristic that sets us apart is our emphasis on balancing academics and ROTC,” Nott said. “Everyone is expected to attend all ROTC events, work hard and succeed despite the often large workload cadets receive at William and Mary. This drives everyone to work hard and push themselves to succeed extremely hard, and in the process [it] creates strong leaders and imparts the importance of hard work and discipline onto all cadets.”

Nott says that his experience as a “military brat” inspired him to pursue a career as an officer, but not all cadets hail from military backgrounds. When she was first looking at colleges, Morgan Bayer ’16 says she was shocked when her mother suggested that she look into the military.

“Probably the one thing I’ve struggled with the most throughout ROTC has been the background material — information on weapons and famous battles and tactics that many kids grow up knowing, but that somehow I totally missed out on while growing up in a non-military family of all sisters that didn’t play video games or really watch movies,” Bayer said. “I constantly feel like I’m playing catch-up on the information that many of the guys take for granted.”

Despite this, Bayer says that participating in ROTC is like being part of a family with siblings that just happen to live all over campus

Harrison Tamke ’18 says that the close-knit nature of the program is one of its greatest assets.

“The people in ROTC are extraordinary,” Tamke said. “The instructors are both experienced soldiers — several have fought in Iraq and Afghanistan — and able teachers. For their part, the cadets are highly motivated and eager to learn. Taken together, they create a very demanding environment, but one which ultimately produces superb leaders. That is what sets us apart.”