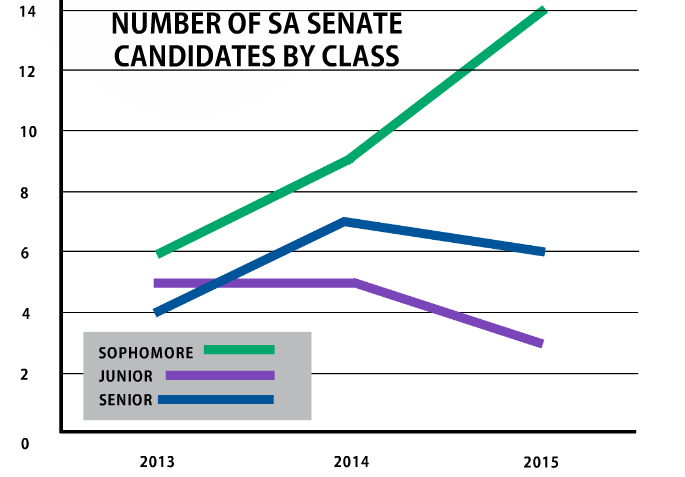 In total, of the 30 students running for office in the Student Assembly — including the positions of senator, class president and SA President and vice president — the class of 2018 comprises over half of the candidates. Class of 2017 President Phoebe Galt ’17, who will not be running for reelection this year, discussed why she believed there was such a sharp disparity in candidates, especially between the classes of 2017 and 2018.

“I’m on the outreach committee within senate and I know we’ve been trying to do a lot to get people more involved, and I think also through the exec we’ve been doing a lot more successful programming to get the SA name out there, so it may just mean that the freshman class has been more exposed,” Galt said.

Elections Commission Chairman Ryan Brophy ’15 had a different perspective on the cause of the disparity in the number of candidates between the class of 2017 and class of 2018.

“We see a lot of involvement in the freshman election especially, and now those 2018 people represent the people who now want to run again as sophomores,” Brophy said. “In the earlier years, I think you see a lot of competition there, but as people get more busy and see their course load increasing [they] decide not to pursue the SA as much.”

Student Assembly Chief of Staff Drew Wilke ’15 said he is not as concerned with the distribution in candidates among the classes.

“If you look back at past elections, every year we usually have between 28 and 32 people running for positions, and this year total we have thirty,” Wilke said. “How it’s distributed across classes varies on year and that class. There really is no specific reason or rhyme; it’s kind of just different trends. But we still hit the number of people running for the positions we have [available] for the past three or four years.”

Brophy and Wilke stated that, barring a write-in campaign for the fourth seat, the empty class of 2017 senate seat will be filled in by the future Class of 2017 president. All SA positions will be decided Thursday, March 26 through an online ballot.