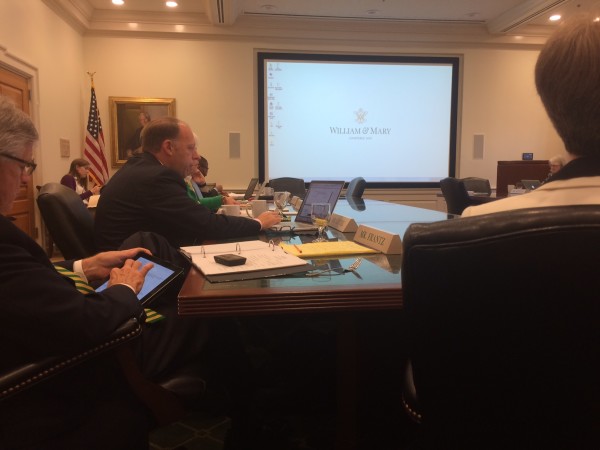 College of William and Mary Rector Todd Stottlemyer ’85 kicked off the Board of Visitors full board meeting Friday with praise for Student Assembly liaisons Yussre El-Bardicy ’16 and Ryan Goss ’16 on their presentation about diversity at the College. He discussed the issues of race and the campus climate.

After those present serenaded BOV member Lynn Dillon ’75 with a rendition of “Happy Birthday,” College President Taylor Reveley noted that the semester is nearly over and said he had received positive feedback about the College’s “For the Bold” campaign.

BOV member Kendrick Ashton ’98 remarked that the alumnus must have been writing from the North Pole, after which the BOV went into a closed session before returning to discuss.

“We have a bumper crop and the progress is really tremendous,” Sydow said. “We’ve already harvested some thousand plus pounds of pecans. The community and the squirrels have harvested at least that many as well.”

“The vessel is getting there,” Baise said. “We are all promised rides on it in 2017 when it is seaworthy. We are looking forward to that. We saw some before and after pictures of what Joaquin did to the various buildings on the eastern shore and we had the VIMS headquarters there. Amazing that as much water as there was, there was really no damage … if there’s a threat, in 24 hours they can pretty much take care of everything.”

The BOV then turned to the Athletics and Finance Committees. Vice Rector Thomas Watkins ’74 spoke on the recent successes of women’s soccer, women’s basketball, volleyball and swimming teams. Ashton discussed a presentation on proposed changes to the retirement plan for faculty and staff.

Moving on to academics, Robert Scott J.D. ’68 said that the number of early decision applicants is down by four to five percent from last year, although he said that the decrease was not substantial enough to be concerning.

“The COLL curriculum is off to an excellent start, receiving good reviews from both faculty and students,” Scott said. “The ongoing, inevitable, incomparable Sachs review will conclude shortly after their site visit here in March. Everything seems to be in order.”

“Apparently the toughest issue, quite understandably, is they all have to ship between one college and the other after the first year,” Scott said. “That’s a cultural shock to some and also impairs their ability in some instances to rise through various organizational ranks to achieve various leadership positions. Nonetheless, the program is strong and hopes to expand the four major areas into two other areas in the next year.”

The BOV then addressed several personnel-related resolutions as a block. These resolutions included hiring Taylor Stephens ’14 as an assistant dean of admission, Christopher Stratton B.B.A. ’08 as a senior associate director of volunteer engagement and Julie Tucker ’01 as a marketing manager.

Before the BOV adjourned into a closed executive session, Stottlemyer concluded the public meeting by addressing old business and wishing everyone a happy Thanksgiving.