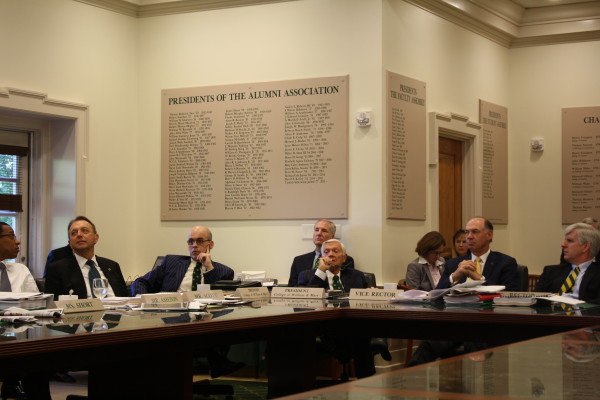 Officials from Richard Bland gave presentations on growth in enrollment, changes in shared government, financial reports, capital outlay and alumni relations. They also sought approval from the board for new personnel, a new budget operating proposal and a six-year plan.

President of Richard Bland College Debbie Sydow next commented on the year’s progress, giving credit to her administrative staff.

Richard Bland Dean of Enrollment Services Tyler Hart then gave a presentation on the enrollment progress. Richard Bland experienced enrollment growth of 8.2%, as well as a 20% increase in freshman class size. Hart also emphasized Richard Bland’s efforts to expand dual-enrollment with local high schools. Furthermore, he argued that Richard Bland was the lowest cost university in the Commonwealth for enrolling students.

“We calculated our net cost per FTE [full time equivalent] across the four year institutions as well as the VCCS [Virginia Community College System] so we have a uniform formula so we come up with the lowest cost per FTE in the state of Virginia, and that’s … students paying tuition as well as the general fund support that we get,” Hart said.

He also discussed the Exceptional Student Experience initiative, which began this year.

“We’ve revamped the way that we do advising; we hired learner-mentors on campus,” Hart said. “The learner-mentors are paired up with a case-load of students and they work directly with the students from the time they arrive on campus on orientation all the way to graduation. We’re very focused on getting them off on the right foot, and then paired with that contact that can walk them through the process.”

He shared a video presentation about how Richard Bland is using analytics to predict student success and tailor advising to students based on relevant data.

Richard Bland’s Dean of Faculty Vern Lindquist updated the committee on faculty affairs. He discussed a new shared governance model, in which of the administration of different areas of study would be broken into more specific areas: natural sciences, computer sciences, social sciences and languages and humanities.

“Before this we had two chairpersons in charge of two very large academic areas, and what the [shared governance] task force decided was it would be better to have smaller areas,”

Lindquist said. “This already seems to be working very well.”

Next, Special Assistant to the President Penny Howard provided the committee with an update on the operating budget. She announced a balanced budget and said that Richard Bland had become more deliberate and efficient in their operating decisions.

Howard also announced Richard Bland’s six-year plan. Richard Bland is asking the state for an additional $1,336,000 investment, which will be broken into three parts: $450,000 for academic support services, $85,000 for technology and infrastructure, and $800,500 for an expanded academic portfolio.

Director of Property Management Eric Kondzielawa updated the committee on capital projects, which included several renovations, as well as a new field house and a new Academic Innovation Center.

Director of the Annual Fund and Alumni Relations Stephen Wilson presented an Advancement update. He announced a 50 percent growth in the Annual Fund and a 25 percent decrease in expenses on solicitation mailing. He expressed optimism about Richard Bland’s ability to grow its annual fund.

At the end of the meeting, Sydow discussed several resolutions. The first two resolutions were to hire several administrative personnel, including the new Assistant Athletic Director and men’s basketball coach Preston Beverly, who was in attendance. These resolutions were approved.

The next two resolutions involved the 2016-2022 six-year plan and the 2016-2018 operating budget. Both these resolutions were approved for processing in the executive session.