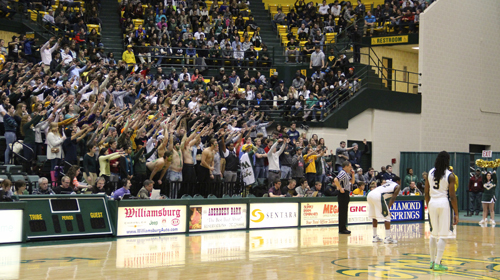 Editor Jack Powers reviews the year that was, complete with awards:

Coach of the Year

Head coach Chris Norris. Yes, the men’s soccer team won two games against No. 1 ranked teams but its overall body of work was even more impressive. Ranked in the top-25 for much of the season, the Tribe finished with an 11-5-3 record and received the program’s first at-large bid to the National Collegiate Athletic Association Tournament.

Credit Norris for helping to develop several young players into key contributors, especially in the team’s attack. Coming off a disappointing 4-10 season held down by an anemic offense, Norris focused on improving his team’s offense. Junior forward Josh West and sophomore forward Jackson Eskay blossomed into consistent scoring threats. Playing with a freshman goalkeeper could have overwhelmed almost any team, but Mac Phillips became one of the CAA’s toughest goalies under Norris’ tutelage.

Look for Norris to lead a more experienced team deep into the conference and post-season play.

Senior of the Year

Senior distance runner Elaina Balouris. Primed to become the most decorated athlete in school history, Balouris has only improved over four historic years at the College.

The five-time All-American paced her team to a 12th place finish at the National Collegiate Athletic Association Cross Country Championships by finishing 11th individually with a time of 20 minutes and 22 seconds.

The fast times keep rolling in during track season. Running with sophomore Emily Stites, Balouris finished 14th at the NCAA Indoor Championships in the 5,000-meters with a time of 17:05.30. Balouris edged out Stites by less than a second in their first outdoor 5,000-meter race at the Colonial Relays. Last Thursday, Balouris set a personal record in the 10,000-meters at the Mt. SAC meet in California with a time of 33:31.59. Watch out for Balouris in the 10,000-meters at the Outdoor NCAA Championships this June. Last year she finished ninth and looks primed to be a legitimate contender this year.

Freshman of the Year

Freshman forward Omar Prewitt. The man who inspires many a nickname — “Oboom,” “the Kentucky Long Rifle” and even “Mr. Get Buckets” — delivered one of the greatest rookie seasons in a program history. Receiving seven Colonial Athletic Association Rookie of the Week awards, Prewitt ran away with the CAA Rookie of the Year award. Prewitt led all conference rookies in six categories, including scoring (11.8), assists (56) and steals (28).

Prewitt’s offensive prowess was evident from the start of the season as he scored 33 points in his first two collegiate games. His clutch attitude became more and more apparent as the season progressed. Down double digits minutes into the second half of the CAA Championship game, Prewitt rattled off seven straight points. Most exciting for Tribe fans is Prewitt’s uncanny ability to throw down seemingly inexplicable dunks, which further demonstrates his immense talent. The future looks bright at Kaplan Arena.

Game of the Year

The Colonial Athletic Association Tournament semifinal. I felt some kind of way about that game. Towson came into it boasting a regular season sweep over the Tribe, and senior forward Jerrelle Benimon had just claimed his second-straight CAA Player of the Year award.

Of course, the Tigers were heavy favorites playing in a tournament game miles from their campus. Many predicted that the game was going to be close, but few could have foreseen just how nerve-wracking it would be. Buried beneath the back-and-forth nature of the contest was a basketball game played at an extremely high level.

Both teams shot at least 50 percent from the field and from three-point range. Eight Tribe players logged at least 20 minutes and each provided key performances. Senior forward Kyle Gaillard limited Benimon to a relatively modest 18 points while junior Marcus Thornton played like the best player in the conference with 21 points and a crucial steal against Benimon with five seconds left. The win highlighted the College’s season.

The bracket used to only be a symbol of National Collegiate Athletic Association championships. Since then, the bracket has wormed its way into all types of sporting events. The Flat Hat sports desk is no exception. Junior guard Marcus Thornton and sophomore distance runner Emily Stites put together a complete body of work, earning spots in the second round. Likewise, senior safety Jerome Couplin and Michael Katz helped lead their teams into national rankings and post-season play, respectively. Thornton provided the College a unique excitement to meet Katz in the final — Katz advanced by virtue of a greater national prominence. Ultimately, the sports desk can’t argue against Thornton’s skill and post-season run.

Editor Chris Weber takes a look at the underlying storylines and trends that shaped the 2013-14 year in sports.

What’s printed on the page is rarely the entire story. While it’s not possible to fully detail a walk-off home run at Plumeri Park or a Marcus Thornton crossover, we face an even more difficult problem every issue.

We fight the word limit. The pages are only so big and we can only fit so much. While covering a game we often do just that — report on the game being played out in front of us. It’s easy to forget the underlying trends and storylines that affect performances and outcomes.

Here are the storylines that, to a certain extent, shaped the 2013-14 year in sports.

William and Mary faced West Virginia in both programs’ season opener. For the Tribe, the contest marked the fifth time in six years it faced a power-conference Football Bowl Series team. Despite entering as a 32-point underdog, the College reminded Mountaineer fans, coaches and players of the danger a motivated Football Championship Subdivision program presents. Despite losing by a touchdown, look for the College to continue contending with larger programs. The Tribe travels to Blacksburg, Va. Aug. 30 to face Virginia Tech.

The men’s soccer program downing No. 1 Creighton was noteworthy, but it turned out to be the start of an even more notable run. The College eased past No. 24 Elon before dropping the new top program, No. 1 North Carolina. Keep in mind the run spanned just nine days, all while the Tribe remained unranked. Throughout the course of a semester, a handful of programs get a crack at top-ranked programs. There’s excitement, but always tempered with large doses of doubt. Head coach Chris Norris and his squad helped turn that doubt into expectation.

Senior guard Brandon Britt was pegged as a key component of any success the College’s men’s basketball team would enjoy. Surrounded by a crop of highly skilled and experienced players, Britt would help lead the Tribe toward its ever-elusive goal: the Colonial Athletic Association championship. Then came the suspension following a “violation of team rules” and Oct. 25 DWI charge. While Britt’s return wasn’t in doubt — he later worked his way back onto the court Dec. 20 vs. Goucher — there were plenty of questions about the team. Head coach Tony Shaver turned loose a rotation of freshman and senior guard Julian Boatner en route to one of the most successful seasons in the program’s history. Give Britt credit as well — throughout the suspension, the team captain never wavered in his responsibilities to the program, and returned to form quickly.

Excellence across the board

Both the men and women’s gymnastics programs turned in historic seasons. From sophomore standout Brittany Stover to senior Landon Funiciello, records fell by the wayside as the Tribe turned in ever-improving marks. Funiciello capped the season falling shy of a national title but did earn yet another All-American nod. What’s missed behind the awards and records is the character of a program that has consistently produced accomplished student-athletes.

It was expected that senior Elaina Balouris and sophomore Emily Stites would take headlines entering the cross country and track season. What wasn’t expected was the extent to which Balouris and Stites would dominate their competition. The duo helped the College advance to the National Athletic Association Championships in cross country, consistently finished in the top-echelon of collegiate runners, shattered school records and qualified for the United States Track and Field National Championships. Despite losing Balouris to graduation, expect Stites to continue the tradition of dominating performances.