Home Sports Features Feature: Where to watch the Tribe 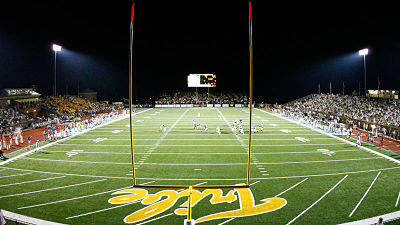 Supporting home athletic events is one of the best ways for incoming freshmen and transfers to quickly assimilate into the William and Mary community. The Tribe competes in several places on and off campus, with renovations and new developments popping up nearly every season. This guide provides background to the facilities where both old and new fans of the College gather to cheer on the 23 NCAA Division I sports programs here at William and Mary.

Description: Built in 1935, Zable Stadium is the home of Tribe football in the fall, and track and field during the spring. In its current state, Zable holds a maximum of 11,686 people, consisting of a brick exterior with bleacher seating and extended temporary bleachers during the football season. The turf field is surrounded by an eight-lane, 400-meter rubber track with sand pits for jump events on the outside of the track, plus pole vault runways and high jump areas on the inside semicircles. Throwing events for track and field (hammer toss for example) are the only track events held in another location; these are held at the Stimson Throwing Events Area next to the Green and Gold Village. Zable hosts the largest outdoor sporting events at William and Mary, including the annual homecoming football game and the Tribe’s largest track event of the year: the Colonial Relays, which brought in over 40 collegiate squads and 30 high school teams in April 2015. The stadium is attached to the Laycock Center, the central hub of Tribe football.

Developments: In 2014, the College presented a plan to renovate the 79-year-old facility. The addition of an upper deck on the western seating area will include additional general seating, a new press box, and a concourse level between the old and new seats, suites and elevators. These changes are currently under construction. The project is slated to be completed by the beginning of the 2016 season. Currently, foundational work, steel outlining beams, and elevator shafts are present.

Description: Nearby, off Ironbound Road and next to Martin Family Stadium, stands Plumeri Park, the home of Tribe baseball. Constructed in the late 90s and opened in 1999, the park has a capacity of 1,000 and consists of the field, a lit scoreboard, a mix of bleacher and stadium-style seating, a lower-concourse concession area, an upper-concourse grandstand, press area, and batting cages. Since games start in mid-February, concession workers often provide free hot chocolate during the cold nights, providing incentive to support the Tribe despite the fickle Williamsburg weather.

Developments: The park itself is relatively new, but the College does not have an indoor practice facility for the crucial preseason months of winter. Plans were drafted, approved and are currently being implemented to correct this disadvantage. In July, the facility was in foundation stages, but will eventually provide a 5,700-square-foot space, including batting and pitching areas in addition to specialized areas for players to work on different skill areas. The additional facility is projected to be completed by the end of the summer.

Description: Located between Zable stadium and the Student Recreation Center, Kaplan Arena can’t be missed while on the western edge of campus. The home of five different programs, the Arena is used through most of the year. Originally opened in 1971, Kaplan, housed within William and Mary Hall, is home to the Tribe Athletics offices, weight rooms, locker rooms and medical areas, as well as a gymnasium space. New students will quickly become familiar with the arena, as several orientation events take place in Kaplan. Capacity ranges from 8,600-11,300 depending on the type of event. Beyond sports, the space is used for concerts, commencement and occasionally speeches by distinguished guests of the College. Banners of retired Tribe basketball numbers hang from the ceiling, marking the athletic prowess of the College’s student-athletes.

Developments: In the Tribe Athletics Committee for Competitive Excellence Report released last spring, the future of the Arena was discussed in terms of either replacement or renovation once the Zable renovation is completed. While some of the structural components are slightly outdated, definitive plans of a large-scale renovation are not likely for the next couple of years, especially given the fact that the arena rarely reaches fully capacity. However, as the men’s basketball program continues to increase in popularity, the Arena has experienced higher attendance levels recently. Fans have been enticed not only by the dominant men’s squad, but also Tribe Athletics’ excellent play and promotions, epitomized by the Gold Rush game in January 2015.

Description: In 2004, construction wrapped up on Albert-Daly Field, providing the soccer and lacrosse teams a grass field to compete on, instead of the turf of Busch Field. In 2010, the facility was improved and made into a proper collegiate stadium, the Martin Family Stadium. Sitting next to Plumeri Park, the stadium sees action throughout the fall and spring seasons. Martin Family Stadium contains a 1,000 seat permanent installation on the eastern side, consisting of concessions and a press box, as well as temporary bleachers on both sides of the field. The grass field allows the College to host NCAA playoff matches, most recently in 2013 men’s soccer hosted George Mason in a devastating first round loss after double overtime and penalty kicks.

Developments: Martin Family Stadium is the College’s newest facility and fully up-to-date. It is unlikely to be altered for quite some time.

Description: Located behind the Commons Dining Hall and Kaplan Arena, this turf field seats 2,271 for field hockey games in the fall and is the home of many intramural sports throughout the year. The field opened in 1990 and was renovated with new lighting and turf in 2012. In inclement weather, lacrosse also uses the facility for competition.

Developments: Since it was updated in 2012, it is a low priority for further renovations.

Description: The Millie West facility consists of eight outdoor courts between Busch Field and the Campus Recreation Center. The facility has functioned as the site of the Colonial Athletic Association championships for the past two years, allowing both the men’s and women’s teams the rare opportunity to claim CAA conference titles at home – which both programs did in 2015.   The facility opened in 2001 and contains bleacher seating around the outermost courts. The McCormack-Nagelson Center is the indoor home of Tribe tennis and is located near the Law School on South Henry Street. It holds six courts, 362 seats and the Intercollegiate Tennis Association Women’s Tennis Hall of Fame.

Developments: These facilities are unlikely to be changed, as they are up-to-date, and there are currently no plans for renovations.

Description: The College does not have its own swimming facility as of now, so instead it uses the recreation center’s pool for home competitions. The pool is on the lower level of the building and possesses no diving area; thus, the Tribe has no diving squad. However, this disadvantage did not prevent the men’s team from claiming a CAA championship title this past winter.

Developments: In the Committee for Competitive Excellence Report, a new swimming facility was discussed as a long-term necessity, citing the lack of a proper practice area as well as interest in bringing back the diving program. This will likely come in the form of a larger multi-sport facility, and is of a higher priority than renovations to Kaplan Arena, according to the committee report.

The cross country and golf teams both use off-campus courses for annual events. Men’s and women’s cross country hold the William and Mary Invitational, a joint meet, at the Eastern State Hospital course off Ironbound Road each fall. The men’s and women’s golf teams hold their respective iterations of the Middleburg Bank Invitational on separate weeks in the spring at the River Course at the Kingsmill Resort, an LPGA Championship course near Busch Gardens.