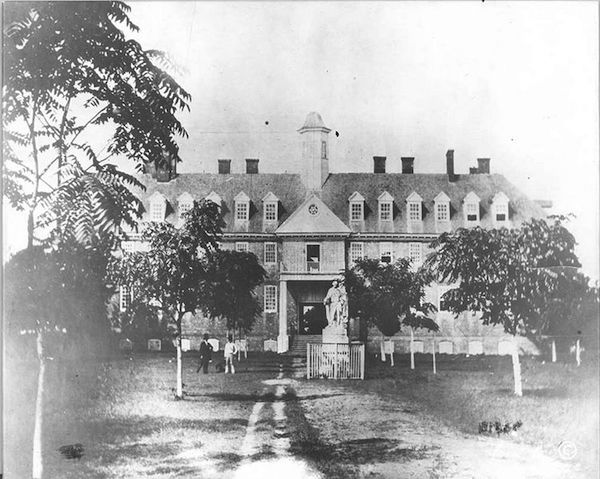 If you’ve ever been on a campus tour, you’ve heard the spiel: The Sir Christopher Wren Building is the oldest college building in the United States of America. Its interests include looking Instagram-worthy and catching on fire. It’s named for one the most famous English architects of all time, Sir Christopher Wren.

But what if I told you that Sir Chris might have had nothing to do with his colonial namesake?

But what if I told you that Sir Chris might have had nothing to do with his colonial namesake? Would you freak out? Well pull yourself together so we can review the cold facts of the case.

Let’s start by looking into the Wren’s origins.

What’s now known as the Wren Building was first built from 1695 to 1700. It was situated on a parcel of 330 acres in Middle Plantation, which only came to be called Williamsburg in 1699. The contractor was an Englishman named Thomas Hadley. Slaves and free laborers likely worked on the construction. The original plan was to construct a quadrangle building with a central piazza, but that was scrapped after the funds dried up.

It’s important to note that the building has changed a lot since its initial construction wrapped. It’s survived three fires, two wars and extension-happy alumnus Thomas Jefferson, whose big ideas about expanding the building were interrupted by the Revolutionary War. As a result, the building has taken on several different forms over the centuries, but has retained most of its exterior walls and its overall architectural integrity.

The structure was creatively dubbed “the College” throughout the 18th century. In fairness, there wasn’t much else to campus at the time, other than the Brafferton and the President’s House. The College building contained student dormitories, a dining hall, classrooms, a library, a kitchen, servants’ quarters and rooms for the president and faculty. No separate slave quarters have been discovered on Historic Campus; it has been hypothesized that slaves at the College slept in the building’s kitchen and cellar.

The name eventually changed in the 19th century, when the structure came to be known as the “Old Main Building.” Two quick succession fires in 1859 and 1862, along with a little thing called the Civil War, left the building a smoldering wreck. After a shaky post-bellum period, which saw a suspension of classes in the “silent years” of 1881-1888, the College rebuilt, resumed operations and went public in 1906.

So, when did that fateful name change happen again?

So, when did that fateful name change happen again? Pretty recently, by College standards, at least.

From 1928-1931, the building was restored to its early 18th century design through John D. Rockefeller Jr.’s Williamsburg Restoration. In 1931, the Board of Visitors renamed the structure the Sir Christopher Wren Building.

Upon what evidence did the BOV base this decision?

Well, the most compelling proof lies with the two glorious revolutionaries and pug enthusiasts who chartered the school.  When co-regents King William III and Queen Mary II signed off on the College in 1693, Wren was the surveyor general of their Office of Works. At that point, he’d been at the post for 24 years.

It’s been suggested that the complex, towering design of the College’s original building was beyond the scope of any provincial builders. Wren himself never swung by North America, but this view envisions him sending out plans to Virginia to help out the fledgling school his bosses just endorsed.

In his 1724 work The Present State of Virginia, Jones credits the royal architect with designing the College building, which he compares to one of Wren’s first major projects: “The Building is beautiful and commodious, being first modeled by Sir Christopher Wren, adapted to the nature of the country by the gentlemen there; and since it was burnt down, it has been rebuilt, and nicely contrived, altered and adorned by the ingenious direction of Governor Spotswood; and is not altogether unlike Chelsea Hospital.”

So, did Wren design his Virginian namesake?

And, that’s it. Let’s recap the evidence one more time.

Exhibit B: The impressive nature of the colonial structure.

Exhibit C: Jones’s account, written decades after the building was completed (to give you a sense, the guy was two years old when the College was chartered).

So, did Wren design his Virginian namesake? It’s certainly possible. It’s also possible that we’ll never know the name of the architect behind the College’s signature building. Because, at the end of the day, the only things pointing to Wren as the culprit—I mean, architect— are circumstantial evidence and hearsay.