Home Sports Features Feature: Catching up with the Tribe 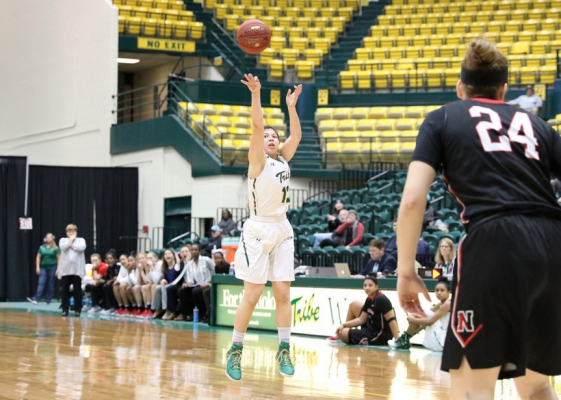 Over final exams and winter break, William and Mary student-athletes continued to compete. The semester ended with a rare win over Richmond on the Zable Stadium gridiron, a lopsided finish at Cameron Indoor Stadium against a nationally-ranked Duke men’s basketball team and a win over regional rivals Richmond and Old Dominion for women’s basketball. Here are the top stories to catch fans of the Tribe up to speed with current trends and standings:

After falling at Duke over Thanksgiving weekend, the College (9-9, 3-4 CAA) closed out the nonconference slate through December, winning four games and dropping three to finish 2016 with a 6-5 record. The Tribe remains undefeated in Williamsburg but has faced road struggles, failing to record a tick in the win column in away games until the nonconference finale at ODU Dec. 29. The biggest margin of victory came Dec. 16 with a 113-59 victory over Milligan, followed by a Dec. 19 victory over Savannah State that ended 112-85. The games marked the first time in program history that the team has broken the century mark in back-to-back matchups.

The offensive explosions inside Kaplan Arena did not translate to the road often during break, as it only defeated one team on the road during break besides ODU.

Unfortunately for the Tribe, the offensive explosions inside Kaplan Arena did not translate to the road often during break, as it only defeated one team on the road during break besides ODU. In a performance similar to that of the Colonial Athletic Association semifinals in 2015, the College defeated Hofstra 95-93 in overtime via a three-point buzzer beater by senior guard Daniel Dixon. Dixon has moved into a role as a leading scorer for the Tribe, putting up a huge effort at ODU with 36 points, followed by games with 19, 25 and 32 points against Northeastern, Hofstra and Elon, respectively.

Before the semester began and the Tribe returned home to beat James Madison Thursday night, the College was 2-3 in CAA play. Current season leaders include Dixon with 16.1 average points per game, sophomore forward Paul Rowley with 47.1 percent from beyond the arc and 92.3 percent from the stripe, senior guard Omar Prewitt with 5.8 rebounds per game and junior guard David Cohn with 4.7 assists per game.

On the horizon are a quartet of home games starting Jan. 26 with Delaware, followed by CAA leader North Carolina-Wilmington Jan. 28, Drexel Jan. 30 and Northeastern Feb. 2. With losses to UNC-Wilmington and Northeastern already, the Tribe’s home perfect-streak will be challenged. The third annual Gold Rush game is scheduled for Feb. 11 against the College of Charleston.

After falling at home to St. John’s in the Nov. 13 opener, the Tribe has had a breakout season, winning 11 straight games for a program record streak. The women’s team (13-4, 3-3 CAA) ended nonconference play 10-1, finishing the close games it has seen trouble with in past seasons in the win column. The College of Charleston was the team that eventually broke the streak Jan. 6 by a 70-60 margin, dropping the Tribe to 1-1 in CAA play. However, the team rebounded for a tight 60-58 win over Northeastern Jan. 13 and a solid outing at UNC-Wilmington Jan. 15. Heading into the past weekend, the College was 13-2, making them the best team of the winter sport seasons to date.

Rendle also made history right before the new year with both her and the program’s second triple-double performance Dec. 29 against East Carolina, notching 14 points, 11 boards and 10 blocks.

The Tribe also made headlines on SportsCenter after senior guard Marlena Tremba hit a third quarter buzzer beater from the other side of the court; the ensuing video reached SportCenter’s Top 10 plays. Tremba continues to lead the College’s scoring with 14 points per game and 2.6 three-point shots per game. Senior forward Alex Masaquel leads the defense with 7.4 rebounds per game (4.7 defensive, 2.7 offensive) and 2.2 steals per game. Junior center Abby Rendle continues to shine after her season was cut short last year, leading with an astounding 4.1 blocks per game with 69 total through 17 games. Rendle also made history right before the new year with both her and the program’s second triple-double performance Dec. 29 against East Carolina, notching 14 points, 11 boards and 10 blocks.

The Tribe hosts its first-ever “Golden Game” this weekend against CAA favorite James Madison after a Friday tilt against Delaware in Kaplan Arena.

The season began in early January for the men’s and women’s gymnastics teams, who have already participated in several meets.

The women opened at Rutgers, where the Tribe finished fourth of four Jan. 7, picking up 188.275 points, five behind team title winner New Hampshire’s 193.425. The College rebounded Jan. 11 at Kaplan Arena against Alaska Anchorage, winning 191.325-188.950. Senior Briana Gironda finished first all-around by winning the floor, bar and beam events. The Tribe dominated on vault with a tie between teammates senior Olivia O’Connor and sophomore Katie Webber for first place, both earning scores of 9.750. This past weekend, the Tribe finished third of three in Raleigh, N.C., when North Carolina State hosted the College and Ball State. Despite the finishing order, the Tribe’s 192.275 is the highest team score of the young season. The effort was aided by a team win on beam and a season-high floor performance.

Notably, men’s gymnastics coach Cliff Gauthier retired at the turn of the year after 43 years at the helm. He remains a volunteer assistant while former assistant coach Mike Powell took over the team on New Year’s Day.

The men competed in the State Open in Williamsburg Jan. 15 and the Navy Open in Annapolis, Md., this past weekend. The State Open ended with the Tribe on top of each of the six individual titles. Freshman Tomas Palma performed well in his collegiate opener, winning floor and vault. Senior Rob Meyer continued his success from last season to finish first on parallel bars and rings. Junior Mitchell Campbell took top honors on high bar, while junior Griffin Antle won pommel horse. Sophomore Peter Makey and freshman Tim O’Neill shared honors with Palma and Meyer, Makey tying Meyer on rings and O’Neill tying Palma on vault. Senior All-American Aria Sabbagh finished first all-around with 71.65 points. The College finished second in a field of four at Saturday’s Navy Open, falling to host Navy 397.65 to 390.6. Meyer finished first on parallel bars while sophomore Jacopo Gliozzi won the pommel horse. Notably, the former men’s gymnastics coach Cliff Gauthier retired at the turn of the year after 43 years at the helm. He remains a volunteer assistant while former assistant coach Mike Powell took over the team on New Year’s Day.

Prior to this weekend’s Christopher Newport Captain’s Invitational, the Tribe competed at the CNU Holiday Open right before students left for winter break. The men took second with 152 points in the field of six, only falling to Norfolk State (160). Five qualifiers for Intercollegiate Association of Amateur Athletes of America went to the Tribe: Senior and All-American Derek O’Connell qualified in pole vault, senior Taylor Frenia qualified for shot put and weight through, junior Preston Richardson qualified in shot put and junior Davion Hutt qualified for the 60-meter dash. The women won the CNU Holiday Open over the field of seven with 158.5 points. Two Eastern Collegiate Athletic Conference qualifiers were earned by senior Rochelle Evans, both in the shot put and the weight throw.

The defending CAA Champion Tribe had a meet at ODU postponed due to the snow over break, but this weekend both the men and women defeated Davidson. The men won 181-107, while the women were victorious by a 164-124 margin. The men (6-3) won three-quarters of the 16 events and have already clinched a winning 2016-17 season dating back to fall meets.

Tribe in the Pros

Joining Pittsburgh Steelers head coach Mike Tomlin ’95 in the National Football League’s list of coaches is Sean McDermott ’98. McDermott was hired by the Buffalo Bills after the regular season ended, becoming the second William and Mary alumni with an active head coaching career. Though they don’t have an alumnus on their team, the Super Bowl-bound Atlanta Falcons have a Tribe connection in head coach Dan Quinn, who began his career in Williamsburg as a defensive line coach. All three of these coaches with a connection to the College were part of the 1994 Tribe football team.